Paradox of Cigarette Sales in Pharmacies Focus of New Movement

Pharmacies, focused on the health and wellbeing of their customers, have long been saddled with a paradox: they sell cigarettes and other tobacco products, even though tobacco use is the nation’s leading cause of preventable death.

If retailers, particularly pharmacies, were to discontinue selling cigarettes, fewer smokers and fewer deaths by smoking would occur, according to a new opinion article co-written by a UC San Francisco scientist. That’s also the premise behind a new decision by CVS Caremark, the nation’s largest pharmacy health care company, to end cigarette and tobacco sales in its stores this year.

In a Viewpoint article published online today in JAMA, the Journal of the American Medical Association, the authors say that selling tobacco products is “clearly antithetical” to the role of pharmacies, especially as pharmacies expand their role as an integral part of the nation’s health care system. 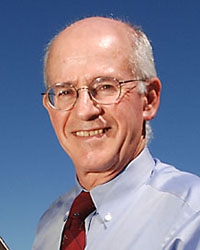 The JAMA Viewpoint is written by Troyen A. Brennan, MD, MPH, executive vice president and chief medical officer of CVS Caremark; and Steven A. Schroeder, MD, a UCSF professor and director of the Smoking Cessation Leadership Center.

Casting a harsh light on tobacco sales in drugstores, the authors say that selling tobacco products contradicts a commitment to health care.

The goal of the authors: eliminate tobacco sales in America’s drugstores.

“Nowhere else in health care are tobacco products available in the same setting where diseases are being diagnosed and treated,” they write.

The CVS decision will cost the company an estimated $1.5 billion in annual tobacco sales, according to the JAMA article.

Initially, the move to eliminate tobacco sales by CVS may not entice significant numbers to quit smoking – instead, customers may go elsewhere to buy cigarettes, the authors say. But if other retailers followed suit, tobacco products would become harder to obtain, the authors write, and thus the health of individuals and the population would benefit.

“Moreover, if people understood that retail outlets that plan to promote health, provide pharmacy services, and house retail clinics are no longer going to sell tobacco products, the social unacceptability of tobacco use will be substantially reinforced,” the physicians write. “Indeed, the continued sale (of cigarettes) would appear to sanction the most unhealthy habit a person can maintain.”

Noting that pharmacies in other developed countries do not sell cigarettes, the authors maintain that if drugstores don’t make this effort voluntarily, federal or state regulatory action would be appropriate.

Moreover, some cities have already banned tobacco sales in pharmacies, including San Francisco and Boston.

The toll from smoking is monumental. Smoking is attributed to the deaths of more than 480,000 people in the United States annually, and costs $132 billion in direct medical costs, the physicians write, depicting it as “one of the most important public health challenges of the 21st century.”

During the last 40 years, tobacco control efforts, including cigarette taxes, smoke-free legislation, and a growth in smoking cessation programs, have reduced the prevalence of smoking in the U.S. from approximately 42 percent of American adults in 1965 to 18 percent today.

“Yet more interventions are needed,” the scientists write in the JAMA article. “The rate of reduction in smoking prevalence has stalled in the past decade, 42 million people continue to smoke, and 16 million current and former smokers suffer from smoking-related illness.”

Studies have demonstrated a relationship between smoking and geographic density of stores that sell cigarettes, the authors say, noting that reducing the number of tobacco outlets will likely reduce smoking among young people – an additional benefit.

Amid rapid changes on the national health care landscape, pharmacies are increasingly reconfiguring themselves. In addition to selling an assortment of wellness products, many stores now offer counseling by pharmacists, outreach to medical providers, and treatment

Making cigarettes available in pharmacies in essence ‘re-normalizes’ the product by sending the subtle message that it cannot be all that unhealthy if it’s available for purchase where medicines are sold,” the scientists write. “The argument that pharmacies also sell tobacco-cessation products only heightens the paradox.”

Schroeder has written about the need to control cigarette merchandising in pharmacies as long ago as 1978 in the American Journal of Public Health.

Schroeder reports no conflicts of interest.

The JAMA collaboration between Schroeder and Brennan was entered into on a voluntary basis through the Smoking Cessation Leadership Center which is supported by the Robert Wood Johnson Foundation, Legacy for Health Foundation, and several government subcontracts.