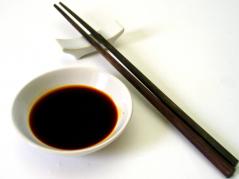 “In some countries where these deficiencies are widespread, there is consistent use—almost a daily dose—of certain condiments and seasonings, such as soy sauce in Southeast Asia, at all socioeconomic levels, and there’s a real opportunity to correct deficiencies by fortifying these food items,” said Luis A. Mejia, a U of I adjunct professor in food science and human nutrition.

According to Mejia, micronutrient deficiencies affect the health and cognitive development of at least one-third of the world’s population, representing 7.3 percent of all global disease. The World Bank has called micronutrient fortification the most cost-effective of all health interventions.

“Just as iodine deficiency has been controlled for many years in the U.S. through salt fortification, we now hope to offer a framework to enrich foods with iron, vitamin A, and other micronutrients in the developing world. Pregnant women are particularly in need of folic acid and zinc to deliver healthy children,” said Allyson Bower, a doctoral student in the U of I Division of Nutritional Sciences.

Micronutrient deficiencies are a real problem in Southeast Asia, specifically in the Philippines, Thailand, Malaysia, Vietnam, and Indonesia; and they also occur in West Africa and in Central America, she added.

Mejia pioneered the fortification of sugar with vitamin A in Guatemala as a scientist at the Institute of Nutrition of Central America and Panama (INCAP), and the program was later expanded to the rest of Central America. Because no single condiment or seasoning is consumed regularly there, sugar was chosen as the vehicle for enrichment.

“Fighting micronutrient deficiencies in this way hinges on finding a suitable food to fortify, and the vehicle chosen is usually a prominent part of the diet in a particular culture. Soy and fish sauces are promising vehicles in Southeast Asia, but bouillon cubes are better suited to West Africa and curry powder would be a better choice in India and Pakistan,” Bower said.

When a suitable condiment or seasoning is chosen, the legal framework that surrounds fortification becomes important. That’s what the two researchers are working on now.

“For example, Vietnam has a soy sauce fortification program, but Indonesia doesn’t. Indonesia does have regulations that allow fortification of wheat flour, margarine, and rice, but not condiments. So we can tell WHO that the legal framework is present in Indonesia and recommend that the organization expand its efforts there,” Mejia said.

Bower is excited about the opportunity to be involved in this project because it has global implications. “Sometimes it seems that the research you’re doing can only be applied at a certain ‘niche’ level, but when you’re working with the WHO, you know they’re going to take what you do and apply it to something that’s long-term and worthwhile. It’s especially rewarding to work on a project like this,” she said.

Mejia and Bower will contribute their recommendations to a WHO meeting in New York August 26-28. Elvira de Mejia, another U of I food science and human nutrition professor, and her collaborators, Yolanda Aguilera and Maria Martin of the Autonomous University of Madrid, Spain, will submit recommendations on industrial processing of condiments and seasonings worldwide.

Other research teams are investigating the bioavailability of micronutrients in fortified foods, their efficacy, the stability of the added ingredients in foods, and economic feasibility, among other concerns. All findings in the WHO’s Fortification of Condiments and Seasonings with Vitamins and Minerals in Public Health: From Proof of Concept to Scaling Up will be published in the Annals of the New York Academy of Science.