Ann Arbor, Mich. —  Using a rear-facing car seat until a child is age two reduces  risk of serious injury, but close to one-quarter of parents report they turned the seat around before their child was even one year old, according to a new University of Michigan study. 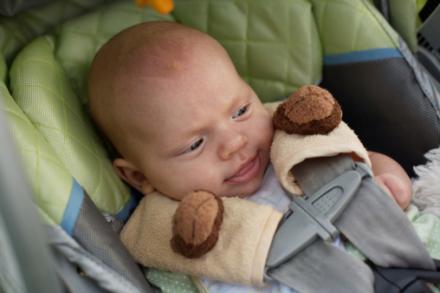 In March 2011, the American Academy of Pediatrics updated its guidelines for child passenger safety, extending the recommendation for rear-facing car seat use from one year of age and 20 pounds in weight to a minimum of two years of age or until a child has outgrown the weight/height limits of their rear-facing seat.

The U-M researchers asked parents about when they transitioned their child to a forward-facing seat in two national surveys – one in 2011, one month after the new guidelines were published and again in 2013.

The research was conducted as part of the C.S. Mott Children’s Hospital National Poll on Children’s Health.

But in 2013, 24% of parents of 1- to 4-year-old children who had been turned to face forward made the switch at or before 12 months. Only 23% reported waiting to turn until the child was 2 years old or older.

“So we’ve seen some improvement, with a higher proportion of parents reporting that they are waiting longer to make the switch to a forward-facing car seat. However, almost one-quarter of parents are turning their children before their first birthday,” says lead author Michelle L. Macy, M.D., M.S., of the University of Michigan’s C.S. Mott Children’s Hospital. “And few parents report waiting until that second birthday to make the turn.”

“Getting parents to delay the transition to a forward-facing seat still represents an opportunity to improve passenger safety in the U.S.,” says Macy, who is an assistant professor in the Department of Emergency Medicine and a member of the Institute for Healthcare Policy and Innovation.

Motor-vehicle collisions remain a leading cause of death among children younger than 4 years and the leading cause of death among older children in the United States, in part because child passengers continue to be unrestrained, and 20 percent of 1- to 3-year-olds and nearly half of 4- to 7-year-olds do not use the recommended restraint for their age.

This study is the first national assessment of the age at which parents report making the transition from rear-facing to forward-facing car seats.

“There are lots of reasons why parents are eager to change from the rear-facing to forward-facing seat: the perception their children are too large, the desire to see their children when driving, and a greater ease of removing their children from a forward facing seat,” says Macy, who also is a member of the U-M Injury Center. “But delaying the switch can make a big difference. In Sweden it is culturally accepted that children up to age 4 are in rear-facing seats and child traffic fatalities are among the lowest in the world.”

In the surveys, parents indicated car seat packaging and clinicians were the most common sources of information about when to start using a forward-facing car seat.

“We hope this research further encourages clinicians to spend time with their patients talking about the benefits of extending the use of a rear-facing car seat. It will be the kids that benefit, if their parents get the right information about how to use restraints and when to make transitions,” says Macy.

Data Source: This report presents findings from a nationally representative household survey conducted exclusively by GfK Custom Research, LLC (GfK) for C.S. Mott Children’s Hospital via a method used in many published studies.  The survey was administered to a randomly selected, stratified group of adults with a child 7 months to 4-years-old from GfK’s web-enabled KnowledgePanel®, that closely resembles the U.S. population. The sample was subsequently weighted to reflect population figures from the Census Bureau.

About C.S. Mott Children’s Hospital in the University of Michigan Health System: