Working on the streets in medically underserved Philadelphia neighborhoods, members of the Do One Thing program have been able to identify residents chronically infected with hepatitis C and help them overcome the hurdles that prevent people from being cured, according to a new study in the Journal of General Internal Medicine.

PROVIDENCE, R.I. [Brown University] — In Philadelphia, as in many cities, neighborhoods with high rates of hepatitis C virus (HCV) often also have limited access to screening and treatment. A new study in the Journal of General Internal Medicine shows that when expert advocates made a focused effort in a medically underserved area, they were able to help vulnerable patients leap each of the many hurdles that often keep people out of care.

The U.S. Food and Drug Administration recently approved several medications that can cure hepatitis C, the most common blood-borne illness, affecting 3 to 5 million Americans. Since 2013, the Centers for Disease Control and Prevention has endorsed routine screening for HCV in medical settings for baby boomers and high-risk individuals. However, few models exist for scaling screening and treatment, particularly for patients who may not have regular access to medical services, said study senior co-author Amy Nunn, assistant professor of behavioral and social sciences in the Brown University School of Public Health.

“New testing technologies, coupled with new medications that can cure HCV, provide overwhelming opportunity to cure millions of Americans living with HCV, many of whom don’t even know they are infected,” Nunn said. “Our paper proves that scaling screening and treatment, even in neighborhoods with the highest rates of infection, is possible. We overcame all the commonly cited obstacles in this high-risk population.”

Working with a team including lead author Dr. Stacey Trooskin of the Drexel University College of Medicine, Nunn has been operating a sweeping HIV and hepatitis C screening and linkage-to-care campaign in several Philadelphia neighborhoods. Since December 2012, the Do One Thing program’s volunteers and workers, including physicians, phlebotomists, patient advocates (“navigators”), and social workers have been going door-to-door to offer screening. They have performed rapid screening tests and, for any positive results, immediate blood draws for confirmatory lab work. For those with confirmed chronic hepatitis C infections, the team provides a full suite of services to guide patients through the process of gaining health insurance, access to medical specialists, and ultimately, to a hepatitis C cure. 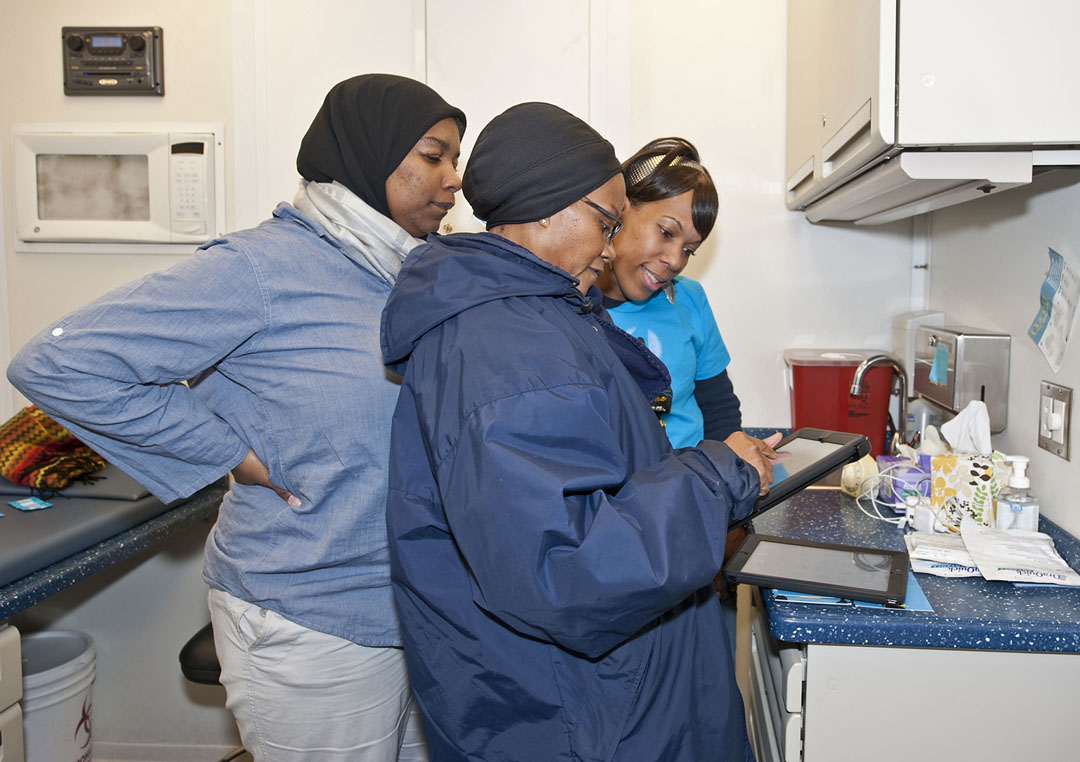 The key is a caring staff
“Do One Thing” staffer members check HCV test reesults in a mobile medical unit. The same person who delivers test results stays with the patiient through treatment to a cure.

“This study demonstrates the importance of community-based testing for HCV in identifying previously undiagnosed individuals and re-engaging those aware of their diagnosis but not currently in care,” Trooskin said. “We learned that a comprehensive approach to nonclinical testing is critical and must integrate immediate access to confirmatory testing as well as intensive patient navigation to effectively link patients to care. Although hepatitis C is now a curable disease, we identified new barriers to care such as the need for a referral to subspecialty care and challenges obtaining medication approval for patients, particularly those covered under Medicaid.”

Nunn said the key is having the caring staff in place to help.

“The secret is the dedicated physician, the patient navigator, and the clinical social worker. One unanticipated challenge is the staff time associated with haggling with payers about coverage for the drug,” Nunn said. “With the advent of new medications that can cure hepatitis C, we have created a culture of urgency about staying in care and cure. This model works because the very same person that delivers your confirmatory test is the person that holds your hand all the way to cure.”

Many hurdles to care

As of February 2014, the Do One Thing team had tested 1,301 people and found that 4 percent had anti-HCV antibodies (higher than Philadelphia’s citywide rates).

When area residents consented to screening, they filled out demographic questionnaires while awaiting results. The data paint a portrait of a distressed population. A third of the people (433 of 1,301) had been incarcerated, many had histories of drug use or mental health conditions, and more than half earned less than $15,000 a year.

Of the 52 people positive for antibodies on the initial screening, only four were already engaged in HCV care. Research has shown that the first critical barrier to treatment is lack of testing to confirm preliminary test results. In Do One Thing, immediate confirmatory testing helped ensure that patients remained in care. Nunn and Trooskin’s team achieved more than double the rate of confirmatory testing previously reported in the literature, the study reports.

The team of navigators and social workers helped everyone who had an infection but no care to become linked to care. Twelve of the chronically infected didn’t yet have insurance. The team helped nine of them get coverage, and another, a man, joined his spouse’s plan. They helped connect people, insured or not, who didn’t have primary care doctors to get one.

Getting a referral to a hepatitis C subspecialist has proven to be the hardest hurdle to overcome, the researchers found. “Referrals often necessitate an extra primary care physician visit and create an opportunity for disengagement, particularly for vulnerable populations with low health literacy,” the authors wrote.

The team’s efforts to get referrals, subspecialty care, and medicines are still underway. But as of February 2014 the team had twice the rate of other studies in getting patients subspecialty care and had already been able to guide 12 patients all the way through the process to receiving the potentially life-saving medicines.

“At the beginning, many naysayers said this wasn’t worth doing because these patients will be uninsured or have problems with addiction; many people thought we wouldn’t be able to get them insured, linked, and retained, much less ever get them drugs to cure their hepatitis,” Nunn said. “But we’ve been able to overcome all the of the commonly perceived barriers to not screening and treating people. This model works. That’s the bottom line.”