ANN ARBOR, Mich. — An advanced form of life support that takes over for the failing hearts and lungs of critically ill patients saves lives. But for adults, the odds of surviving depend on which hospital provides the life-supporting treatment – with the best odds at ones that use the technique dozens of times a year, a new study finds. 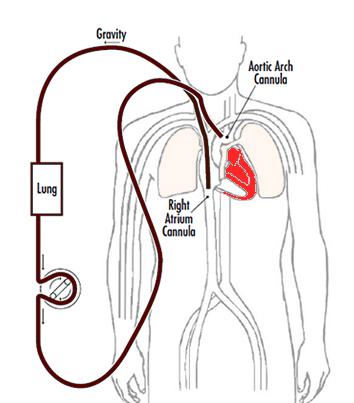 In ECMO, machines take over for both the heart and lungs to keep the patient alive.

That’s the key finding of the first large study in patients of all ages, of a life-support technology called ECMO. Researchers at the University of Michigan Medical School looked at data from 56,222 patients treated at 290 hospitals around the world over 25 years.

The use of ECMO to treat adults has risen exponentially in the last decade, and grown steadily in children, the authors report in the American Journal of Respiratory and Critical Care Medicine. Though ECMO has existed since the 1970ss, its use has grown as technology has improved and its potential to save lives became known. 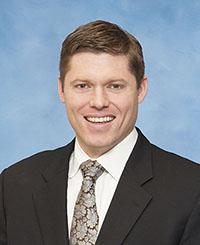 “As use of ECMO rises, it will be very valuable to understand how best to provide this care, because it’s resource-intensive and carries a high risk of complication and death,” says lead author Ryan Barbaro, M.D., a pediatric critical care specialist and clinical lecturer at the U-M Medical School.

The researchers hope their current and future work will lead to collaborative efforts to standardize ECMO care, and improve outcomes for ECMO patients everywhere.

In the paper, they report that adults treated with ECMO were less likely to die when they were treated at hospitals caring for more ECMO patients per year.

But they stop short of recommending a cutoff point for the minimum number of ECMO cases a hospital should have in order to warrant offering ECMO as an option.

A potential life-saver for the critically ill

Short for extracorporeal membrane oxygenation, ECMO is a complex treatment option that requires a team of doctors, nurses, specialists and respiratory therapists working together around the clock for days or weeks to keep a patient alive.

Because of its complexity and risk, ECMO is most often used as a last resort in patients suffering massive lung failure, heart failure, the effects of massive infection such as sepsis or pneumonia, trauma, or in newborns with major congenital defects. 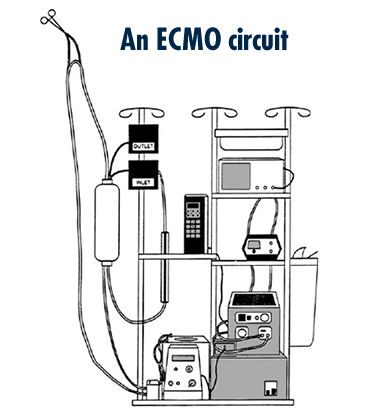 A simplified diagram of the
complex set of components
that make up an ECMO circuit.

Used only in intensive care units, the bedside ECMO machine or “circuit” pumps the patient’s blood out of the body through specialized tubes, and into a system that oxygenates and removes carbon dioxide from it before returning it to the body with enough force to keep it circulating.

In short, the ECMO machine takes over the functions of the patient’s heart and lungs – giving them time to recover. But the treatment team must constantly guard against clots, infections and over-thinning of blood that could kill the patient.

The new study finds tremendous variation in survival rates between centers, even though for children and newborns those variations don’t map neatly to the number of ECMO patients treated.

At some hospitals, 18 percent of newborn ECMO patients died, at others it was 50 percent. For children, death rates ranged from 25 percent to 66 percent. And for adults, they ranged from 33 percent to 92 percent.

Most of the hospitals that provide ECMO around the world contribute data to a database maintained by the nonprofit Extracorporeal Life Support Organization, or ELSO, based in Ann Arbor and with an academic tie to U-M. The researchers analyzed the ELSO database to produce the new paper.

The U-M Health System has played a key role in the development and improvement of ECMO technology and care, under the lead of emeritus professor of surgery Robert Bartlett, M.D., a co-author on the new paper. 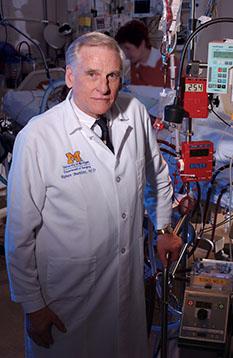 Barbaro’s interest in studying ECMO outcomes began when he began taking part in the treatment of ECMO patients in the pediatric intensive care unit at U-M’s C.S. Mott Children’s Hospital. He could see the level of teamwork required, and the impact of the timing of the decision to place a patient on ECMO life support – or to transfer one to a hospital that provides ECMO from one that does not. He also saw that different hospitals had different protocols for using ECMO, and configured the components of the ECMO system different.

The new finding that the volume of patients treated is associated with different odds of survival is just the tip of the iceberg, says Matthew M. Davis, M.D., MAPP, co-senior author on the paper and director of the pediatric health services fellowship program in the Child Health Evaluation and Research (CHEAR) Unit that includes Barbaro.

“As more and more hospitals offer ECMO, we need to ensure that we apply the same rigor to studying and improving care that we do to other services for which volume and experience matter for patient survival and other outcomes,” says Davis. “By sharing what we learn about best practices, we can do our best as a healthcare system to achieve the best results for critically ill patients.”

Previous studies of ECMO outcomes in newborns and children had used data based on billing, which did not include full details about a patient’s medical condition. The ELSO database used in the new study does include such information, which allowed the authors to adjust the data to make an “apples to apples” comparison of survival rates at different hospitals. It also allowed them to study adults on a large scale for the first time ever.

“If volume is associated with better outcomes, we as a medical community need to be selective about where to add new centers, and look at distance between centers and outcomes at each one,” says Barbaro. “But this has to be balanced against the risk of transferring very delicate patients.”

For patients and their families: The new findings mean that it’s important to ask about ECMO as a possibility early in an intensive care stay that requires mechanical ventilation. That might mean asking to be transferred to a hospital that offers it, while transport is still possible, and asking about the experience levels of the hospital

Authors: Bartlett, co-senior author Gail Annich, M.D. of the University of Toronto, and co-author Matthew Paden, M.D.  of Emory University are members of the ELSO steering committee. Other authors are Folafoluwa O. Odetola, MBChB,  of U-M Medical School Department of Pediatrics and Communicable Diseases, Kelley M Kidwell, Ph.D. of the U-M School of Public Health. Davis and Odetola are members of the U-M Institute for Healthcare Policy and Innovation.

Funding: Barbaro is a member of a training program funded by the Eunice Kennedy Shriver National Institute for Child Health and Human Development (F025206 – 064171). The study also received support from the Extracorporeal Life Support Organization and the Charles Woodson Fund for Clinical Research.