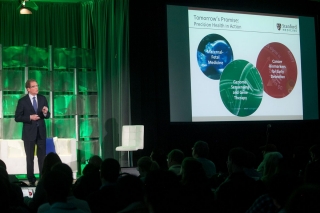 Lloyd Minor gives a keynote address on the last day of the Big Data in Biomedicine Conference.
Saul Bromberger

Aggregating large quantities of health data could revolutionize physicians’ ability to diagnose and treat diseases, but getting patients and organizations to share that data poses a challenge, according to speakers at Stanford’s third annual Big Data in Biomedicine Conference.

The conference, held May 20-22 at the Li Ka Shing Center for Learning and Knowledge, drew some 500 attendees and more than 3,000 remote viewers.

The era of big data — the collection, storage and analysis of vast amounts of information gathered from disparate sources — is no longer in the future; it’s happening today. The goal of tailoring all aspects of health care to specific individuals rather than adhering to a one-size-fits-all approach rests on the ability to pool and analyze data on large numbers of people.

But until efforts to share this information can overcome privacy concerns, lack of interoperability in the technical realm and disincentives within the research community, the promise of using big data to help patients and healthy people alike will go unrealized, many of the speakers said.

The fuel that powers precision health, Minor said, is big data: the merging of genomics and other ways of measuring what’s going on inside people at the molecular level, as well as the environmental, nutritional and lifestyle factors they’re exposed to, as captured by both electronic medical records and mobile-health devices.

Precision health requires looking beyond medical data to behavioral data, several speakers said. This is especially true in a modern society where it is behavior, not infectious disease, that’s increasingly the cause of disability and mortality, noted Laura Carstensen, PhD, professor of psychology and founding director of the Stanford Center on Longevity. 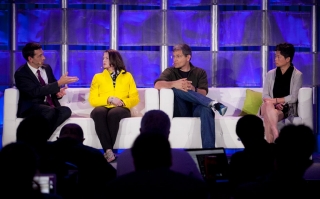 In her talk, Carstensen showed a cartoon of one caveman musing to another: “Something’s just not right. Our air is clean, our water is pure, we get plenty of exercise, everything we eat is organic and free-range, and yet nobody lives past 30.” Along with predators, violent altercations and bouts of mass starvation, a huge factor in Og and his peers’ truncated life expectancies was contagious disease. Periodic epidemics continued to wipe out large populations of entire continents throughout recorded human history until only a century or so ago.

Now it’s a different story, Carstensen said, because the scourge of contagious disease, which modern humans have largely defeated, has been replaced by an epidemic of chronic diseases of aging. For this reason, physical fitness is one of the greatest predictors of long-range health outcomes today, she said.

Ida Sim, MD, PhD, professor of medicine and co-director of biomedical informatics at the University of California-San Francisco, noted that one in four Americans has at least one chronic disease. “Chronic diseases account for 84 percent of health-care costs and 70 percent of deaths in the United States. And chronic disease is mostly caused by behavioral factors,” she said.

That’s where mobile devices for monitoring everyday behavior can be useful in ways electronic health records can’t. Several speakers touched on the potential for using mobile-health devices to survey behavior and chronic disease and, perhaps, provide insights that could be used to support better behavior.

“There are 700 million people in the world with iPhones,” said conference organizer Euan Ashley, MD, PhD, associate professor of cardiovascular medicine and of genetics. “That allows us to look at fitness in a very large population. Each of those iPhones is an accelerometer that can detect its owner’s activity cheaply, without wearing down your battery too much.” 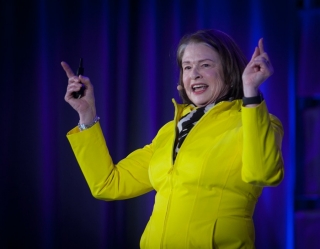 Carstensen, founding director of the Stanford Center on Longevity, said physical fitness is one of the greatest predictors of long-range health outcomes today.
Saul Bromberger

Scott Delp, PhD, professor of bioengineering and of mechanical engineering, is director of the new Stanford-based Mobilize Center, which is dedicated to understanding and increasing human movement. It is one of 12 Big Data to Knowledge Centers funded by the National Institutes of Health. “If you don’t move, you’re vulnerable to heart attacks, strokes and more,” Delp said.

Phones and sensors are available to millions of people, he said. “They’re low-resolution, but they’re on all the time. We don’t know how to use them effectively yet. We need to integrate video, cell phones and wrist accelerometers, and bring it all together to create an open-source motion-analysis software package that’s free for all to use.”

By monitoring 24/7 which room of one’s home one is in at any given minute over a 100-day period, you can detect key changes in behavior — changes in sleep-wake rhythms, for instance — that can indicate or even predict the onset of a health problem.

An expert in analyzing conversations, Dishman recounted how he’d learned, for example, that “understanding the opening patterns of a phone conversation can tell you a lot,” including giving clues that a person is entering the initial stages of Alzheimer’s disease. Alternatively, “the structure of laughter in a couple’s conversation can predict marital trouble months before it emerges.”

“To understand the genes of the one, you need to study the genes of the many,” said David Glazer, who founded and leads the genomics team at Google Inc. But that means sharing data, and there are some strong disincentives to doing that, said a number of speakers, including David Haussler, PhD, professor of biomedical engineering at UC-Santa Cruz.

“On June 1, 2000, the Human Genome Project announced the world’s first human-genome sequence,” said Haussler, who is scientific director of UCSC’s Genomics Institute. “In so doing, we became the first species to read our own recipe. What’s emerged since then is a series of genome silos,” he said. “Medical facilities won’t share DNA information, because they feel compelled to protect patients’ privacy. There are legitimate security and privacy issues. But sharing this information is vital. We’ll never cure rare DNA diseases until we can compare data on large numbers of people. And at the level of DNA, every disease is a rare disease: Every disease from A to Z potentially has a genomic component that can be addressed if we share our genomes.”

We’ll never cure rare DNA diseases until we can compare data on large numbers of people.

Disincentives for sharing are not just a problem for medical institutions. Several speakers noted the reticence of academics, who often withhold data until — and even beyond — journal publication in order to reap the rewards of being the first to publish a novel insight.

“It shouldn’t just be that you just give up your career to do a good thing,” said Brian Wandell, PhD, professor of psychology. “We need to find ways of giving credit to young researchers who’ve compiled huge data sets — for example, letting those researchers retain user rights for their primary data.”

Sharon Terry, president and CEO of the Genetic Alliance, put it succinctly. “To herd cats,” she said, “you need to move the food.”

But it may be that ordinary people will step up to share personal data on a scale that enables the aggregation of huge piles of data, both behavioral and genomic.

A recently launched collaborative effort by Stanford and Apple called MyHeart Counts is doing just that, Ashley said. Almost 40,000 people have signed up for a research study that makes use of MyHeart Counts, a free app that collects data about physical activity as well as wearer-entered data related to cardiac risk factors. “Two months ago, it was zero,” he said.

Jill Hagenkord, chief medical officer of 23andMe, said the company was founded in 2007 with the goal of keeping people healthy by giving them access to their own genomic information, from which many useful things can be inferred: responses to specific medications, inherited health conditions and predispositions, ancestry, and “interesting traits” such as whether one finds broccoli bitter.

“23andMe holds the world’s largest database of engaged, genotyped and phenotyped people,” Hagenford said. The company has accumulated not only extensive genotypes on some 950,000 people, she added, but also a great deal of customer-supplied health and behavioral data that researchers can sift through. “About 80 percent of our customers have consented to their data being used for research,” she said.

“People say, ‘Why would you pay $99 to find out if you have wet or dry earwax? Just stick your finger in your ear.’ But communicating the genetic basis of traits such as this one is a great way to introduce consumers to the power of the genome,” Hagerford said.