Couples who perceive a drop in happiness in the first year after they became parents, have a lower probability of having a second child. A study by the Max Planck Institute for Demographic Research (MPIDR) in Rostock, Germany, has shown that the larger the loss in well-being, the smaller the probability of a second baby. The effect is especially strong for mothers and fathers who are well educated and older. 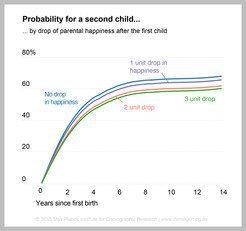 Well-being after first birth matters: The percentage of parents who get another child after the first one grows larger for couples who experienced less loss in well-being in the year after their first child. Self-reported happiness has been measured in units from zero to ten (maximum happiness). Data: German Socio-Economic Panel Study (SOEP)
© Max Planck Institute for Demographic Research

The investigation deals with a taboo subject. It is rarely discussed that parents often experience a considerable loss of happiness after the birth of a first child. The new study shows that for mothers and fathers in Germany the drop in life satisfaction during the year following the first birth is even larger than that caused by unemployment, divorce or the death of a partner.

These findings have now been published by Mikko Myrskylä, demographer and new director at the MPIDR, and Rachel Margolis from the Sociology Department at the University of Western Ontario in the Journal Demography.

“Parents’ experience with and after the first birth help predict how large the family will be eventually,” says Mikko Myrskylä. “Politicians concerned about low birthrates should pay attention to the well-being of new parents around and after the birth of their first child.”

In order to explore how the birth of the first child influenced parental happiness, the researchers made use of mother’s and father’s self-reported life satisfaction in the German Socio-Economic Panel Study (SOEP). Every year 20,000 participants assessed their contentedness with life on a scale from zero to ten (maximum well-being).

After the first child mothers and fathers reported a loss of well-being that averaged to 1.4 units on the happiness scale. They felt this decline during the first year of parenthood compared to the two years before the birth. Only just under 30 percent of the participants did not feel any decline in well-being. And more than one third experienced a decline of two or more units of happiness.

This is notable compared to what international studies find for unemployment or the death of the partner (both with an average loss of one happiness-unit) or for divorce (minus 0.6 units) on the same scale.

Calculations done by Myrskylä and Margolis now show how strongly experiences made with the first child affect chances for a second. Only 58 out of one hundred couples who reported a drop in well-being of three units or more had a second child within ten years. But among parents who did not feel a reduction in happiness, 66 out of one hundred couples had another baby. Thus, the share of families with at least four members was almost 14 percent larger if happiness did not decline. These results are independent of income, place of birth, or marital status of the couples.

Mothers and fathers over 30 years old and those who have been educated for more than twelve years were especially influenced by their state of well-being when it came to deciding about having more children. Gender, however, was not an indicator. “Both parents have learned what it means to have a child,” says Myrskylä. “Those who are older and better educated may be more able or willing to revise their family plans based on prior experience.”

Sticking with one child

The details of what makes new parents unhappy were not part of the study. “Generally, new parents complain about a lack of sleep, relationship stress and a feeling of loss of freedom and control over their lives,” says MPIDR director Myrskylä. Difficulties when trying to reconcile family life and work also play a role. A long and difficult labour and delivery might also be important.

The immediate loss of well-being during the first year of parenthood has to be put into perspective. Before the baby is born, happiness levels rise noticeably above the previous long-term average because of the joyful anticipation. “On the whole, and in the long run, despite the unhappiness after the first birth of a baby, having up to two children rather increases overall happiness in life,” says Mikko Myrskylä.

These new research results help to explain a long-standing contradiction in fertility: although most German couples still say they would like to have two children, birthrates have fluctuated below 1.5 children per women for the past four decades. While rising childlessness is often discussed as a cause, it remains widely unrecognized that more and more couples in Germany have a first child, but not the second one they had initially wanted.

Data on a taboo subject

Research on parental happiness is rare, as most mothers and fathers wouldn’t admit their true feelings of unhappiness in connection with the birth of their children. This is why Myrskylä and Margolis turned to a question for general happiness with life in the German Socio-Economic Panel Study (SOEP). Formally it is not associated with the children of the participants at all.  But the answers can be connected to them by their timing, as the SOEP does not only inquire self-reported happiness on a yearly basis but also records each person’s life history, including important events like childbirths.