Her life's work: Changing society's views of rape and how its victims are treated 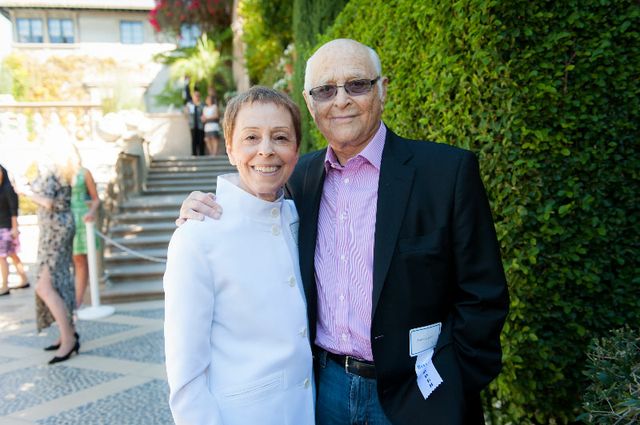 Gail Abarbanel and Hollywood giant Norman Lear at a 2013 fundraiser for UCLA’s Rape Treatment Center. Lear consulted Abarbanel in the 1970s for an episode of his TV show, ‘All in the Family,’ that catapulted the issue of rape into American homes nationwide.

It wasn’t long after Gail Abarbanel began working as a social worker at Santa Monica Hospital, in 1974, that she was asked to see a young woman who had been brought to the ER following a suicide attempt.

The woman, in her late 20s, had been walking on the beach when she encountered a stranger, who attacked and repeatedly raped her.

“She couldn’t find any place to go to for help,” Abarbanel said. “It was very different then. There were no rape crisis centers, no rape kits, there was nothing written about rape in the medical or psychiatric literature, and there was very little knowledge about the psychological trauma victims suffer.” This victim felt she could not tell her parents, and five or six days later she tried to kill herself.

That encounter shook Abarbanel to her core, and subsequently she devoted her life to helping victims of sexual assault.

“I thought that should be the last time there was no place for rape victims to turn for help,” Abarbanel said. “Many came to the hospital at night and on weekends. I put myself on call so I could be there when they first reached out.”

Later that year, she founded the Rape Treatment Center, now a part of UCLA Medical Center, Santa Monica and one of the most comprehensive facilities of its kind in the nation.

Abarbanel has fought hard to change the way society views rape. “We took our model and what we were learning from victims and traveled around the country. By educating others, we have changed the way victims are treated nationwide,” she said.

Soon, Abarbanel realized that rape victims needed more extended treatment and support after they left the ER, and she sought to expand the center’s services. She received help from philanthropist Joan Palevsky. Then Norman Lear, producer of the groundbreaking TV series, “All in the Family,” decided to do an episode in which a main character, Edith Bunker, is raped. He called Abarbanel and asked her, “If you could talk to 40-million people about rape, what would you want to say?”

Abarbanel became a consultant for the show, and the episode catapulted the issue into American homes nationwide. “It really raised the nation’s consciousness,” Abarbanel said. After the episode aired, many women, including some in Lear’s production company, approached him to tell him that they had been victims of rape, Abarbanel said. “He was so moved that he became a founding member of the board and helped us raise money and break the silence about rape to build community support.”

Throughout the years, the Rape Treatment Center has worked to change numerous laws that were discriminatory and held rape victims to different standards than any victims of other crimes.  Aileen Adams, who was legal counsel for the Rape Treatment Center before later becoming the nation’s top victim advocate in the U.S. Department of Justice during the Clinton Administration, noted that “California was one of many states that required victim resistance as an element of the crime, and we worked to eliminate those standards.”

The center later worked with Attorney General Janet Reno to launch a national campaign to educate the public about the emerging issue of drug-facilitated sexual assaults.  Then, after seeing a number of cases in which undocumented women were raped by people posing as immigration officials and threatening deportation if they did not comply, the center tackled the issue of “badge-of-authority rapes,” and legislation was passed that amended the California Penal Code to cover this kind of coercion in sexual-assault cases. The Rape Treatment Center also tackled the issue of rape on our nation’s college campuses, including working with universities to change their codes of conduct to address sexual violence among students and give victims rights and protections equal to those provided for accused students.

In 1988, the center created Stuart House for child victims. A decade later, the center established the Verna Harrah Sexual Assault Examination Clinic, a 24-hour emergency facility dedicated exclusively to providing care for rape victims – children and adults. Both programs have become international models, and professionals from around the world turn to the center for consultation and training.

Remembering that first victim she helped in the hospital’s ER, Abarbanel said, “The care we provide for victims remains today the heart and soul of the Rape Treatment Center. Their experiences inspire us and teach us what needs to be changed in our laws and public institutions and guide our education and prevention programs.”

Said Tracey, a rape victim who sought treatment at the center: “During my rape, I was terrified and humiliated to the point of numbness. He broke my soul. Afterwards, for so long, I could not see the light at the end of the tunnel. Because of the Rape Treatment Center, now I am standing in that light.”

This story was originally published in the Summer 2015 online edition of UCLA Health’s U Magazine. See a related story, Healing Space, about the expanded Stuart House opening this fall.