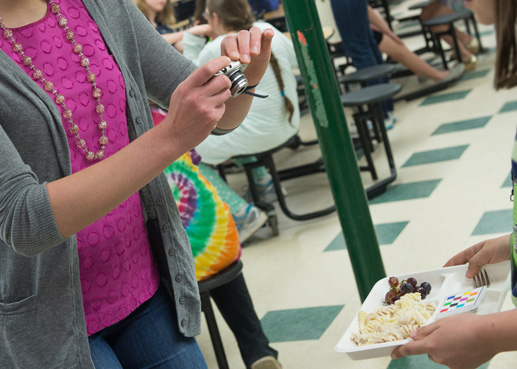 The use of digital imaging allowed the team to gather data more efficiently than previous methods, which involved weighing plates. (Photo: Sally McCay)

One of the first studies to measure food consumption in schools before and after the implementation of a controversial mandate by the U.S. Department of Agriculture confirms what school lunch officials initially feared and subsequently witnessed: students putting fruits and vegetables into the trash instead of their mouths.

The study, published online in Public Health Reports on Aug. 25, shows that although students selected more fruits and vegetables under the new mandate requiring them to take either a fruit or vegetable, they actually consumed slightly less of each. Through the use of digital imaging to capture students’ lunch trays before and after they exited the lunch line, researchers predict approximately 56 more cups of FV were thrown away each day (assuming 400 lunches served) based on the increase in average tray waste.

“The basic question we wanted to explore was if under these 2012 USDA guidelines, does requiring a child to select a fruit or vegetable correspond with consumption,” says Sarah Amin, a researcher in Nutrition and Food Sciences at the University of Vermont and lead author of the study. “It was heartbreaking to see so many students toss fruits like apples into the trash right after exiting the lunch line.”

The study comes less than a month before Congress votes on whether to reauthorize the Healthy, Hunger-Free Kids Act of 2010, which was the first in 15 years to update school nutritional standards. Championed by Michelle Obama as part of her “Let’s Move” campaign, a recent poll by the W.K. Kellogg Foundation shows that 86 percent of Americans support the nutritional standards required by the law.

Although school lunch officials expressed concerns with enforcing the policy, they were successful as students’ trays containing fruits or vegetables increased to 97.5 percent compared to 84.3 percent prior to implementation. Unfortunately, more than 80 percent of 240 school nutrition directors surveyed in a separate study two years after implementation reported increased waste by students, especially when it came to vegetables. Amin and her colleagues set out to measure how much waste, if any, was actually occurring in their paper “Impact of the National School Lunch Program on Fruit and Vegetable Selection in Northeastern Elementary Schoolchildren, 2012–2013.”

“School nutrition directors and cafeteria staff were concerned with being able to provide the increased variety of fruits and vegetables under the new guidelines and were experiencing some operational and cost challenges,” says Amin, who thinks the new guidelines, which include a reduction in portion sizes, may be playing a role in a decline in school meal participation nationwide. “We used validated dietary assessment methods to corroborate what they were saying and measure consumption before and after the mandate,” she says.

Amin and her co-authors, research associate Bethany Yon, graduate student Jennifer Taylor, and Rachael Johnson, the Robert L. Bickford Jr. Green and Gold Professor of Nutrition and Food Sciences, documented almost 500 tray observations over 10 visits before implementation of the USDA guideline and almost twice as many afterwards. Approximately 40-60 percent of the students at the two elementary schools qualified for free or reduced lunch, a marker for low socioeconomic status.

The research team used a digital imaging method that they validated three years ago in the Journal of the Academy of Nutrition and Dietetics to measure consumption after the mandate was implemented. Prior to implementation, they relied on a laborious method known as weighed plate waste that required as many 10 people to weigh lunch trays before and after students left the lunch line. “We found that we could get within one gram of the mean consumption when compared to weighed plate waste, so it’s extremely accurate and far less time consuming.”

With digital imaging only two people were required to take photos of students after they filled their tray and another before disposing of it. “The beauty of this method is that you have the data to store and code to indicate what was selected, what was consumed, and what was wasted as opposed to weighed plate waste, where everything needs to be done on site,” says Amin, who hopes to develop an online training tutorial that could be used by schools across the country to measure consumption and waste.

“There are some really promising strategies targeting school settings such as farm-to-school programs and school gardens that can help to encourage fruit and vegetable consumption in addition to what the cafeteria is providing,” says Amin.

Once schools have fully acclimated to the guidelines, Amin thinks consumption will increase, especially for students who entered as kindergarteners under the new guidelines in 2012 and know no other way. “An important message is that guidelines need to be supplemented with other strategies to enrich fruit and vegetable consumption,” she says. “We can’t give up hope yet.”