ANN ARBOR, Mich. — As electronic cigarette use skyrockets among youth, even teens agree with parents that what’s known as “vaping” needs stricter rules. 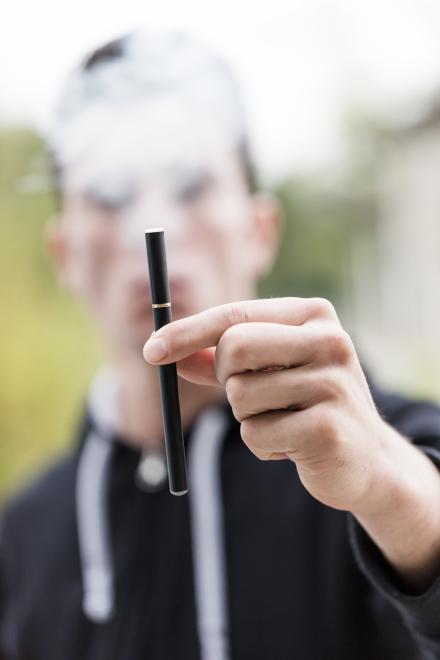 More than three fourths of both teens and adults say e-cigarettes should be restricted in public spaces, come with health warnings and be taxed like conventional cigarettes, according to today’s C.S. Mott Children’s Hospital National Poll on Children’s Health at the University of Michigan.

All U.S. states except for Pennsylvania and Michigan restrict sales to minors – and an overwhelming majority of adults and teens agree with these laws, the poll found. More than 80 percent of parents and teens also think that allowing teens to use e-cigarettes will encourage them to use other tobacco products.

“Just as we are seeing declines in smoking of conventional cigarettes, there has been rapid growth in use of electronic cigarettes among youth. Our poll indicates that both parents and teens agree that e-cigarettes pose several concerns,” says Matthew M. Davis, M.D., M.A.P.P., director of the National Poll on Children’s Health and professor of pediatrics and internal medicine in the Child Health Evaluation and Research Unit of U-M’s C.S. Mott Children’s Hospital.

“We found overwhelming public support of state efforts to keep e-cigarettes out of the hands of minors.”

Earlier this year, the Centers for Disease Control and Prevention reported that electronic cigarette use among middle and high school students had tripled from 2013 to 2014. E-cigarette use had also surpassed current use of every other tobacco product overall, including conventional cigarettes.

In a 2010 Mott poll, only 37 percent of adult respondents had ever heard of e-cigarettes, compared to 86 percent in 2013. E-cigarettes have raised health concerns because they contain nicotine, an addictive substance that can lead teens to experiment with other tobacco products.

This is the first Mott poll to include the voices of teens, with a nationally-represented group of parents of teens and teens themselves 13-18 years old.

“Some people may be surprised that teenagers’ views are remarkably consistent with what parents think about e-cigarettes,” Davis says. “The strong level of agreement between parents and teens suggests that both groups are concerned about the health hazards of e-cigarettes.”

Data Source: This report presents findings from a nationally representative household survey conducted exclusively by GfK Custom Research, LLC (GfK), for C.S. Mott Children’s Hospital via a method used in many published studies.  The survey was administered in September 2015 to a randomly selected, stratified group of parents age 18 and older with at least one child age 13-18 (n=1,517); among a subset of these parents, their teens also responded to teen-focused questions (n=636). Parents were selected from GfK’s web-enabled KnowledgePanel® that closely resembles the U.S. population. The sample was subsequently weighted to reflect population figures from the Census Bureau. The survey completion rate was 40% among panel members contacted to participate. The margin of error is ± 2 to 5 percentage points.