Drug curbs marijuana use, but with tough side effects

PROVIDENCE, R.I. [Brown University] — Combining the drug topiramate with psychological counseling curbed marijuana use among young smokers significantly more than did counseling alone, according to newly published results of a small randomized controlled trial at Brown University. The results come with a caveat, however: Many study volunteers couldn’t tolerate the medicine’s side effects.

There is no FDA-approved medication for treating cannabis dependence and misuse. Meanwhile, the benefits of counseling treatment, such as motivational enhancement therapy (MET), aren’t enough to help many patients, said Robert Miranda Jr., associate professor (research) of psychiatry and human behavior in the Alpert Medical School.

Miranda and his co-authors conducted the trial as the first test to determine whether topiramate, an epilepsy drug marketed as Topamax, could add to the benefits of MET. Researchers including Miranda have studied topiramate as a potential treatment for alcohol and nicotine dependence and cocaine addiction.

The results show the drug provided a statistically significant benefit. While topiramate didn’t reduce the frequency of smoking significantly more than therapy alone, study participants who received the medication and MET used less marijuana each time, on average, than participants who got counseling and a placebo.

“The positive news is it did seem to have some effect and that effect seemed to really be focused on helping people reduce how much they smoke when they smoke,” said Miranda, lead author of the study in the journal Addiction Biology and member of the Center for Alcohol and Addiction Studies in the Brown University School of Public Health. “It’s promising in the sense that it suggests that medications can help, but it asks questions about for whom it might be most effective because many people can’t tolerate the medication.”

To conduct pilot study, the first to test topiramate for cannabis dependence, Miranda’s team recruited 66 volunteers, aged 15-24, who smoked at least twice weekly but were interested in receiving psychological and drug treatment to reduce marijuana use. Heavy use is associated with impaired memory and executive cognitive function, difficulty sustaining attention and filtering out irrelevant information. Initial screening showed that more than half of the participants met clinical criteria for marijuana dependence or abuse.

Whether they were assigned to the placebo group or to receive topiramate, all participants received 50-minute MET sessions at weeks one, three, and five of the six-week study. MET involves professionally guided motivational discussion about quitting or reducing use. 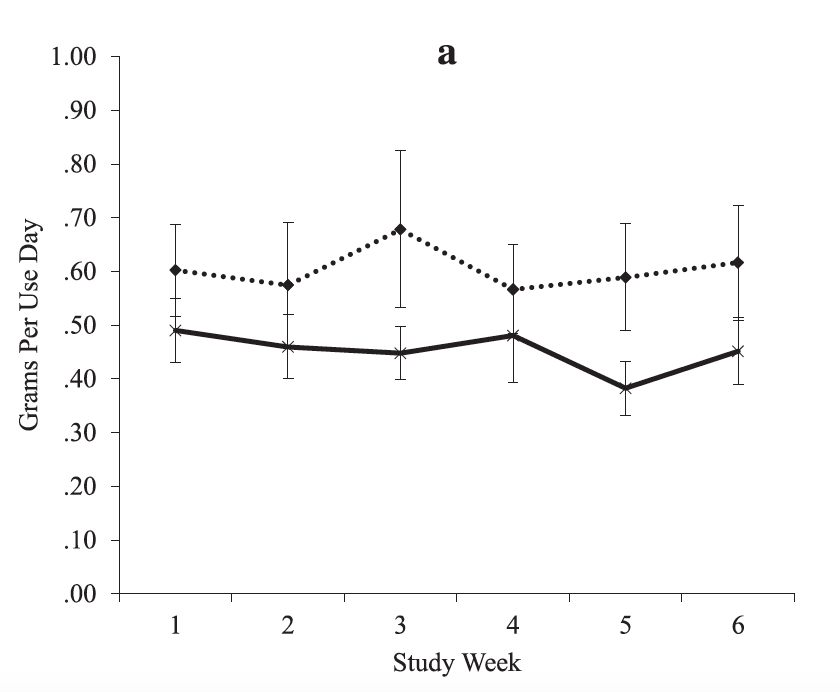 Of the 66 volunteers, 40 received topiramate in doses that slowly scaled up from 25 miligrams in week one to 200 miligrams by week five, before being tapered out a few days after the study’s end.

Through consistent interviews and other means during the study, volunteers recalled how often they smoked and how much (urine tests also showed whether they were using marijuana and also taking either the medicine or placebo). Both groups reduced the number of days on which they used marijuana by statistically similar amounts, but those who took the medication also used on average about 0.2 fewer grams of cannabis each time.

While Miranda said he was encouraged by the results showing a significant additional effect from the medication, it was clear the treatment was not for everyone. At the end of the six-week study, 21 of the 40 subjects receiving the drug had dropped out compared to only six of the 26 people taking the placebo. Two-thirds of those who left the study after using topiramate cited the side effects as their reason for leaving. They complained of problems such as depression, anxiety, trouble with coordination and balance, weight loss, and unusual sensations.

One next step in the research, Miranda said, would be to conduct a larger and perhaps longer trial. Another useful experiment would be to determine whether genetic markers or other factors can help predict who will have less difficulty with topiramate’s side effects. That knowledge would allow any future clinical treatment to be targeted to patients who will benefit.

The National Institute on Drug Abuse funded the study (grant DA026778). Swift disclosed in the study that he is on the advisory board of D&A Pharma.