ANN ARBOR, Mich. — For many, checking online reviews has become nearly routine for decisions on everything from cars to restaurants. But when it comes to choosing a doctor, the majority of parents aren’t convinced online ratings are reliable – or even real, a new national poll shows. 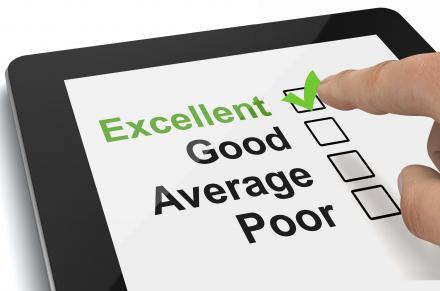 More than two-thirds of parents believe some online doctor reviews are fake, while slightly fewer say there are not enough ratings to make a good decision, according to this month’s report from the C.S. Mott Children’s Hospital National Poll on Children’s Health. More than half of parents also feel doctors may influence who leaves ratings.

“Online rating sites are becoming an increasingly common and potentially influential source of information for parents as they choose a doctor,” says lead author David Hanauer, M.D., a pediatrician at U-M’s C.S. Mott Children’s Hospital. “Websites reviewing doctors are readily available, but concerns about how trustworthy they are may be preventing parents from using them broadly.”

Nearly one-third of parents report looking at online doctor ratings for themselves or a family member over the past year. Moms are more likely than dads to visit these websites – 36 percent compared to 22 percent, respectively.  Among parents who have considered online ratings, two-thirds say they either chose or avoided doctors based on what they read. 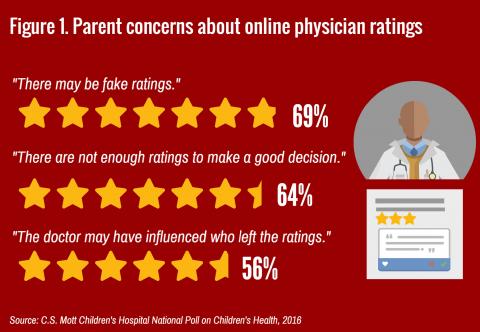 Among parents who selected a doctor because of ratings, 87 percent say the online ratings accurately reflected their subsequent experiences.

Older parents also generally had more concerns about online doctor ratings than younger parents. Of parents age 30 and older, 71 percent were concerned about the possibility of fake reviews compared to 59 percent under the age of 30.

“People are regularly using online reviews to help make decisions about cars, movies and restaurants. It’s no surprise that more websites are allowing patients to publicly share their experiences about their doctors as well,” says Hanauer, who is also a clinical associate professor at the U-M Medical School with a joint appointment in the School of Information and member of the U-M Institute for Healthcare Policy and Innovation.

“Doctor rating sites have the potential to help make the patient-physician relationship more service-oriented. In order for online rating sites to become a more accepted and useful tool, doctors will need to be more engaged in the process, in ways that assure that ratings are authentic.”

Data Source: This report presents findings from a nationally representative household survey conducted exclusively by GfK Custom Research, LLC (GfK), for C.S. Mott Children’s Hospital via a method used in many published studies.  The survey was administered in January 2016 to a randomly selected, stratified group of parents age 18 and older with at least one child age 0-17 (n=1,407). Parents were selected from GfK’s web-enabled KnowledgePanel® that closely resembles the U.S. population. The sample was subsequently weighted to reflect population figures from the Census Bureau. The survey completion rate was 54% among panel members contacted to participate. The margin of error is ± 2 to 9 percentage points.