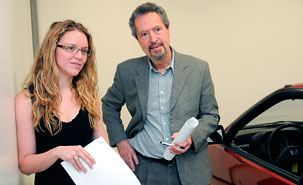 The more “macho” the man, the more risks he took on the road, according to a study by Julie Langlois, a graduate student at the Université de Montréal Department of Psychology, who presented her findings at the annual conference of the Association francophone pour le savoir (ACFAS).

“Our hypothesis was that hypermasculine drivers, often referred to as macho, were more likely to take risks in order to catch a car,” says Langlois. “We didn’t tell test subjects to disobey the law, yet they knew others had accomplished the same task in seven minutes.”

So what is a macho man? In 2004, an American researcher developed the Auburn Differential Masculinity Inventory, a questionnaire to identify such men. It comprised 60 statements such as “men who cry are weak,” or “generally speaking, men are more intelligent than women.” Men had to answer questions on a scale of one (strongly disagree) to five (strongly agree).

Results of the car simulator exam highlighted men’s slight tendency for risk. Still, it was during interviews that a link between macho men and speed revealed itself. “Previous studies had shown that hyper-masculine men were more aggressive on the road,” says Langlois. “But we wanted to take it further.”

“Some men develop a passion for driving that can verge on the obsessive,” says Langlois. “They consider cars to be an extension of themselves and they become extremely aggressive if they are honked at or cut off.”

During testing, some participants disregarded how they were being evaluated on their degree of masculinity and caught the car within five minutes. Others caught the car in 12 minutes and were much less dangerous on the road.

Langlois’ study found that aggressive behavior is deeply rooted in the male stereotype. Aggressive driving allows some men to express their masculinity, which could serve as a predictor of dangerous driving. Cars are often a vehicle by which character traits are expressed and preventing risky behavior is an issue of public safety.