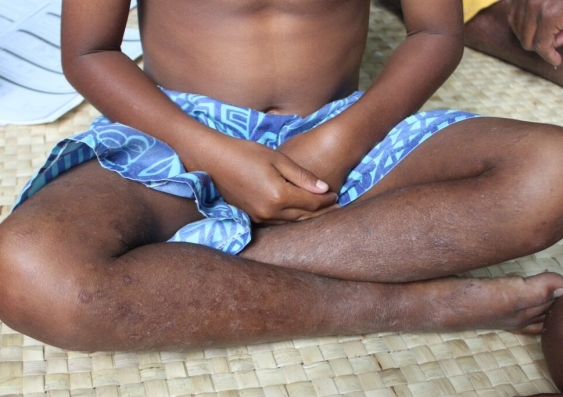 The first ever international review of scabies and impetigo has indentified global hotspots and revealed children are disproportionately affected by the debilitating infectious diseases.

The systematic review, led by UNSW’s Kirby Institute with collaborators, analysed findings from 48 surveys, mostly from developing countries in the Pacific, Latin America and Africa. The results were published today in The Lancet Infectious Diseases journal.

Impetigo rates were highest (45%) in the studies of children from remote Aboriginal communities.

Scabies is a skin disease caused by a tiny mite that burrows under the skin and is transmitted through close personal contact. It can cause debilitating itching which often leads to bacterial infections of the skin, most commonly impetigo. These skin infections can develop into more serious and potentially deadly infections of the kidney,heart and the bloodstream. In 2013 the World Health Organization added scabies to its list of neglected tropical diseases.

Study author Ms Lucia Romani, from the Kirby Institute, says the data compiled from the review likely represents only the tip of the iceberg for scabies and impetigo prevalence worldwide.

“This review has revealed a number of gaps in prevalence data, for instance in Central America, where only two countries had data we were able to analyse,” she said.

”Further research is needed if we are to get an accurate and complete picture of the prevalence of scabies worldwide in order to assist with prevention efforts.”

Scabies and impetigo have never been accorded priority in health programs and research, despite regular reports of high prevalence and impact. The review reveals pockets of the global population are disproportionally affected by the diseases, which are considered endemic in some island countries in the Pacific, Ms Romani said. “Perhaps this is because their impact is spread across a broad range of disciplines including dermatology, infectious disease and paediatrics.”

The study investigators, along with the Fiji Ministry of Health and other partners, are currently researching the efficacy of mass drug administration to control scabies and its health complications in Fiji. The results of this trial are expected to be published later this year.

The study was conducted with the support of the National Health and Medical Research Council and undertaken in collaboration with the Murdoch Childrens Research Institute. No population-based data were available from North America, most countries of Europe, or non-Aboriginal populations in Australia.

The Global Burden of Disease Study 20104 provided an estimate of global prevalence of both conditions but did not base its estimate on a systematic review of the kind reported today.