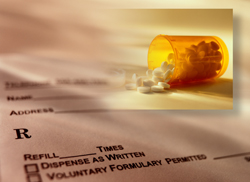 Amy S. B. Bohnert, Ph.D., of the Department of Veterans Affairs, Ann Arbor, Mich., and colleagues examined the relationship between opioid prescribing patterns (dose and schedule [“as needed,” regularly scheduled, or both]) and risk of opioid-related deaths from 2004 through 2008 among diagnostic subgroups of patients (chronic pain, cancer, acute pain, and substance use disorders) in a national sample of Veterans Health Administration (VHA) patients. The study included data on all unintentional prescription opioid overdose decedents (n = 750) and a random sample of patients (n = 154,684) among those individuals who used medical services in 2004 or 2005 and received opioid therapy for pain.

The researchers approximated the rate of overdose among individuals treated with opioids to be 0.04 percent. Opioid overdose decedents were statistically significantly more likely to be middle-aged and white; more likely to have chronic or acute pain, substance use disorders, and other psychiatric diagnoses; and less likely to have cancer.

“The present findings highlight the importance of implementing strategies for reducing opioid overdose among patients being treated for pain,” the authors write. “This study documents a relationship between opioid prescribing and opioid overdose in a large, national, prospective cohort of individuals receiving opioid therapy for a variety of medical conditions. The risk of opioid overdose should continue to be evaluated relative to the need to reduce pain and suffering and be considered along with other risk factors.”
(JAMA. 2011;305[13]1315-1321.)