Staying on track Researchers haven’t been sure whether exercise can help women fight cigarette cravings. A new study suggests that it can, but the effect is short-lived Credit: Michael Cohea/Brown University
For years researchers have found that exercise can curb nicotine cravings, but have struggled to show a practical benefit in trials. Newly published research suggests a reason: the effect is too ephemeral. The next step, funded by a 5-year grant, will be to see how frequently exercise might be needed to have a lasting therapeutic effect. 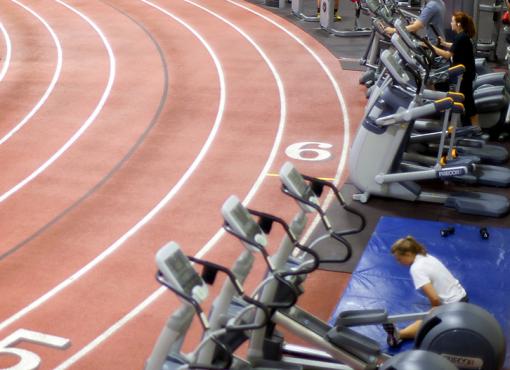 A new study may explain why and help researchers devise a practical therapy.

The explanation suggested in the results of research led by David Williams, an assistant professor of community health at Brown University, is that while exercise does help improve the mood of smokers and curtail their cravings, the effect is short-lived.

“What we found is that although there is no chronic effect of exercise on cigarette cravings and affective withdrawal symptoms, there is an acute effect that diminishes over a period of several hours to 1-2 days, but can be renewed with each bout of exercise,” said Williams, first author of the study published May 11 in the journal Addictive Behaviors.  “One implication for these findings is that exercise may be a useful treatment strategy, but it has to be done frequently enough and consistently enough because the effects that it has diminish over time.”

To conduct their pilot study, Williams and colleagues at The Miriam Hospital, the University of Massachusetts at Boston, and St. George University of London signed up 60 female smokers for an 8-week regimen of smoking cessation treatment. They were all given quitting counseling and nicotine patches. Half were assigned to the exercise group, in which they briskly walked on a treadmill at the study center for 50 minutes three times a week.  The 30 women in the control group watched 30-minute health and wellness videos three times a week.

For each group the researchers asked them about their mood and cigarette cravings immediately before and after each session. They also asked them again when they reached their next destination after each exercise or wellness session.

The researchers found that, relative to participants in the control group, those who exercised were more likely to experience improved mood and decreased cigarette cravings, but that these effects dissipated by the time of their next exercise session.  On one hand, the improvements in affect and cravings are encouraging, Williams said, but clearly it wasn’t sustained even over a matter of a few days.

The next step, he said, is to enroll a larger sample of women in a randomized, controlled trial.  That work is well underway because in February his pilot research led to a new NIH grant for $2.2 million over 5 years to study the issue in further detail. The study will allow him and his team to provide enrolled women with electronic devices where they can record their cravings and mood more frequently.

Once Williams has a better sense of when the effects of exercise wear off, he’ll know how frequent exercise needs to be to sustain its anti-craving benefit.

In addition to Williams, other authors are Shira Dunsiger, Joseph T. Ciccolo and Ernestine Jennings of the Warren Alpert Medical School of Brown University and The Miriam Hospital, Jessica Whiteley of the University of Massachusetts at Boston, and Michael H. Ussher of St. George’s University of London, UK.