Identity crisis? Vapers who continue to smoke are in denial about their addiction and could struggle to kick the habit

People who vape as well as smoke traditional cigarettes may find it harder to quit as they don’t see themselves as smokers, according to research undertaken by Kingston University.

Describing a typical smoker as smelly, inconsiderate and lacking self-control, many who use e-cigarettes – also known as vaping – while continuing to smoke traditional cigarettes are likely to try to distance themselves from a group they regard negatively, the research found.

One participant commented that he would be offended if labelled a smoker and another said he regarded himself as a vaper because it was more socially acceptable – despite both participants still smoking traditional cigarettes.

Dr Tushna Vandrevala, an expert in Health Psychology and Senior Lecturer at Kingston University who co-wrote the report, said there was limited evidence about why, despite being promoted as a means of smoking cessation, the use of e-cigarettes did not always help smokers to kick the habit. 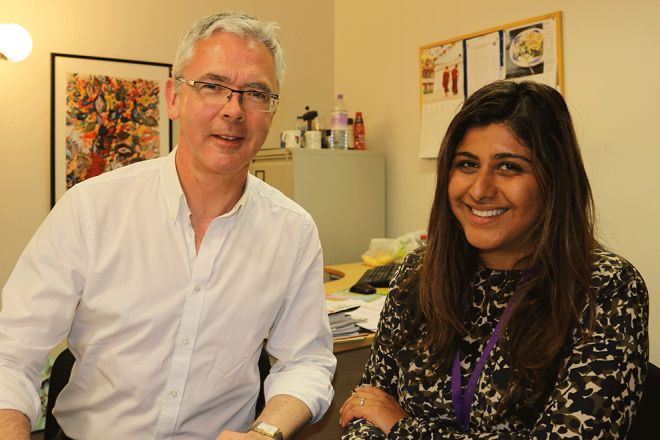 Kingston University’s Professor Adrian Coyle, Chair in Social Psychology, with Dr Tushna Vandrevala, an expert in Health Psychology and Senior Lecturer at Kingston University”Our study suggests this may be linked to identity,” Dr Vandrevala said. “People who exclusively smoke cigarettes and wish to dissociate themselves from the negative smoker identity tend to quit. But those who continue to smoke alongside using e-cigarettes tend to dissociate themselves from the negative image of a traditional smoker.

“They view themselves as an enhanced or healthier version of the person they were when they smoked and therefore belong in an in-between position,” she added.

Professor Adrian Coyle, Kingston University’s Chair in Social Psychology and co-author of the report, explained that this in-between position depended on who they were with at the time. “Dual users seem to inhabit a position of sort-of-smoker or sort-of-vaper, depending on whether they are with smokers or vapers at the time,” he explained.

The study, which was based on data collected by final-year psychology students at Kingston University and has been published in the online journal Health Psychology Open, explored the key motivating factors for people taking up e-cigarettes and examined how people’s experiences of vaping differed to smoking.

Financial concerns and health concerns were cited as key reasons for taking up e-cigarettes in favour of traditional cigarettes, as well as being able to use e-cigarettes in environments where smoking is forbidden. Peer influence also played a factor, with vaping seen as cool and more socially acceptable by many of the participants.

However, it was the issues around identify and social perceptions which proved fascinating to Dr Vandrevala and Professor Coyle, and have prompted them to investigate issues of identify among dual users further.

“We need to see how sustainable this in-between, sort-of-smoker and sort-of-vaper identity proves to be for dual users. It may be difficult for them to sustain if it’s psychologically uncomfortable and if it’s undermined by peers who are solely smokers or vapers,” Professor Coyle said.

“And if it’s hard to sustain, do dual users revert to using traditional cigarettes only or do they become exclusive vapers?”

The growing number of dual users highlights the need for more research in this area, Dr Vandrevala said.