Houston-Supported by a $1.4 million grant from the National Science Foundation (NSF), researchers in UH’s Medical Robotics Laboratory (MRL) are creating a robotic system to one day be used in cardiothoracic surgeries that would not only automate, but also increase the precision of surgeries. This surgical system, guided by magnetic resonance imaging (MRI), incorporates a highly flexible robotic device to maneuver within the beating heart and past organs through the body, resulting in minimal trauma to patients. 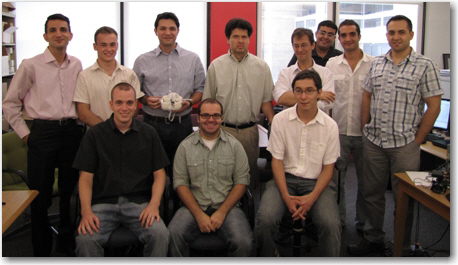 Funded through NSF’s cyber-physical system (CPS) program, the project is led by Nikolaos V. Tsekos, the director of the MRL, associate professor of computer science at UH and principal investigator on this grant. The award is funding the development of methodology for performing surgical procedures using robotic devices with real-time MRI image guidance. In particular, Tsekos and his team are pursuing the development of something called MIROS – Multimodal Image-guided RObot-assisted Surgeries – that is a novel CPS for performing heart surgeries.

“MIROS is an integrated system composed of multiple cyber and physical elements, ranging from computer algorithms to biomedical sensors to robotic manipulators, that coordinate their operation to achieve a task,” Tsekos said. “It is the final system that integrates the robot, the MRI scanner, computers and software, and the tactile and visualization interfaces with the patient and the operator. MIROS is modular and upgradeable, so we can add new pieces of software, reprogram the existing ones, change parts of the robot or even change out the entire layout of the robot, according to the needs of the specific surgery.”

Three critical features of MIROS are that it can combine, merge and use multimodality imaging techniques that carry complementary types of information; enable the performance of surgeries on a beating heart without having to stop its natural motion; and immerse the operator into the procedure through a visual-tactile interface. With multimodality imaging, such as MRI, the team aims to provide surgeons with real-time information to enhance diagnosis and in-situ assessment before, during and after the surgery.

“For performing the procedures on a beating heart, a special robotic device is under construction,” Tsekos said. “Imagine that instead of using a straight surgical tool you use one that looks like a snake, needing to maneuver it through a maze of moving walls that you must avoid. With robots we can address the issues of limited access to the patient in the MRI machine, as well as increase maneuverability.” 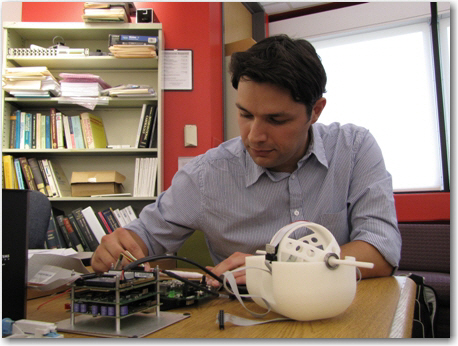 The first version of MIROS is specially designed for procedures that involve entering the heart through the myocardium, which is the muscular tissue of the heart. Without limiting the versatility and generality of the system, the MIROS team has selected the challenging clinical paradigm of an alternate aortic valve replacement, with hopes it will result in a quicker procedure, less trauma and faster recovery.

While robots are not new in being used to perform laparoscopic procedures, manual or robot-assisted laparoscopy offers visualization inside the patient by means of cameras and video. Tsekos’ plan is to incorporate real-time image guidance to continuously collect images from the targeted area and guide the robot. This takes these surgeries from keyhole-type viewing with cameras to a larger, 3-D field of view with imaging.

“The system we are developing is comprised of many dedicated, specially designed components, incorporating not only the robot, but also tools to collect and process the MRI data from patients during surgery. This ranges from real-time tissue tracking to augmented reality and tactile interfacing for surgeons,” Tsekos said. “These are enabling technologies and methodologies that then can be adopted and used for other types of surgeries or with other existing or developing robotic systems.”

To reduce the number of animals used in this research, the team will perform all of the work on this particular NSF grant without animal subjects. To do this, the MRL group is creating what Tsekos called an “actuated heart phantom,” a computer-controlled machine that has 27 motors that move different structures to mimic the anatomy and motion of the beating heart.

“We will use our actuated phantom inside an MRI scanner, as well as in the lab, to replicate any desired type of cardiac motion, such as simulating the conditions of arrhythmias and breathing patterns,” Tsekos said. “We will test and investigate the operation of each component and the MIROS system as a whole by simulating surgeries on this phantom instead of animals for the first phase of this project. Additionally, our team will work with Methodist on another version of this heart phantom onto which we will ultimately attach a heart from a porcine cadaver acquired from a slaughterhouse. Once attached, the simple push of a button will replicate the heart’s real motion in the lab and inside an MRI scanner.”

In addition to Tsekos’ MRL group, the research team includes a number of other professors from UH. From the computer science department, Zhigang Deng leads the effort for the novel visual-tactile interface, while Ioannis Kakadiaris and Shishir Shah work on new image-processing concepts. Mechanical engineers Karolos Grigoriadis and Javad Mohammadpour are focused on the control and construction of the tactile device. The TMHRI surgeons, Mark Davies, M.D., Barbara L. Bass, M.D., and Dipan Shah, M.D., also play a critical role in this project. Davies’ focus is on the design of particular cardiac robotic applications, Bass’ focus is on the overall design of the system in view of its potential use for surgeries in other organs and Shah’s contribution is in the area of cardiac MRI.

“They work independently and in synchrony, innovating and shaping this project on a daily basis,” Tsekos said. “We are very fortunate and proud to have them as members of the MIROS team.”

NOTE TO JOURNALISTS:
A video of the Medical Robotics Laboratory is available at http://www.youtube.com/watch?v=ik21XEBARuA. Photos of Nikolaos Tsekos and others in the lab are available to media by contacting Lisa Merkl.