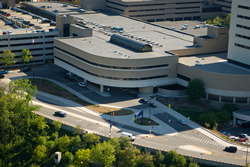 ANN ARBOR,Mich. – When under general anesthesia it is unknown whether patients experience a flip-flop from unconsciousness to the waking state, or if there’s a more gradual return of consciousness.

Using a novel approach based on mathematical “graph theory,” a team of international researchers lead by the University of Michigan Health System, shows both continuous and discrete elements of anesthetic state transitions.

The team’s research, published in the April issue of Anesthesiology and highlighted by an editorial, also reveals a critical role played by the parietal cortex of the brain in changes in consciousness.

“Understanding the dynamic organization of anesthetic induction and emergence will be important to clarify for a more precise understanding of general anesthetic mechanisms as well as the development of more sophisticated intraoperative neurophysiologic monitors,” says study author George A. Mashour, M.D., Ph.D., director of the Division of Neuroanesthesiology at the U-M Health System.

U-M researchers, which included Uncheol Lee, Ph.D., worked with colleagues from Mexico and Korea to reveal that changes in consciousness are better correlated with general anesthetic-induced disruption of information processing in the parietal cortex, rather than the brain’s frontal cortex, which is usually monitored by anesthesiologists.

“Are we putting our electrodes in the wrong place to estimate depth of anesthesia?” writes editorial authors who put a geographical spin on the brain’s complex and dynamic network of neurons in the editorial “The Seven Bridges of Konigsberg.”

According to the editorial: “These data are in agreement with an increasing body of work arising from the study of pathologic coma states, which indicates that parietal cortical processing is a critical hub in the ‘seat of consciousness.’”

The study may lead to a new era in electroencephalogram analysis and understanding of the way patients emerge from anesthesia.

Methods: Twenty healthy males were anesthesized with propofol with a continuous measurement of 21-channel electroencephalogram at baseline, during anesthesia and during recovery.