DALLAS –   – A lung transplant to relieve Christopher Bryant Vera from devastating effects of cystic fibrosis marked the 500th lung transplant performed at UT Southwestern Medical Center, positioning the Center among an elite group of fewer than 25 in the country to achieve that benchmark.

“It was a great gift from the donor’s family and I’m going to do my best to make my life worthwhile,” said Mr. Vera, 25, of Arlington.

Dr. Fernando Torres, Associate Professor of Internal Medicine and Medical Director of Lung Transplantation, said every transplant is a remarkable accomplishment and stories such as Mr. Vera’s underscore the significance of reaching volume milestones. Fewer than 25 medical centers in the country have performed more than 500 lung transplants.

“Having performed 500 lung transplants is an important milestone because it indicates a level of care that is a little different from institutions that don’t do many transplants,” said Dr. Torres, a pulmonologist who also heads UT Southwestern’s Pulmonary Hypertension Program. “Large-volume centers tend to have better outcomes for patients.”

Dr. Wait and Dr. Torres expect the Lung Transplant Program at UT Southwestern to continue to grow, with expansion setting the stage for finding new techniques and technologies to improve the field of transplant medicine and care for patients.

UT Southwestern’s Lung Transplant Program recently acquired new “ex vivo perfusion” technology for testing and improving the viability of donor lungs, which will expand the number of available donor lungs. “We are the only lung-transplant center in the state using this technology to test organs that otherwise could not be used for transplant,” Dr. Torres said. 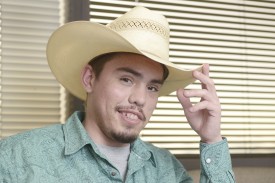 Christopher Vera, of Arlington, a cystic fibrosis patient, was the 500th patient to have a lung transplant at UT Southwestern Medical Center.

For Mr. Vera, the importance of a finely honed lung-transplant program will be reflected on a daily basis. Mr. Vera was diagnosed with cystic fibrosis when he was just five weeks old. Cystic fibrosis is an inherited disease caused by one or more mutations in the CFTR gene. This gene defect leads to the production of thick, sticky mucus that builds up in the small airways of the lungs. Patients with cystic fibrosis are highly susceptible to lung infections.

When he was in grade school, Mr. Vera would get up at 6:30 every morning for breathing treatments that took more than an hour to complete before going to school. There were daily visits to the school nurse and constant hand-washing to prevent respiratory infections.

He participated in Reserve Officer Training Corps in high school and had always thought he’d join the military. After graduating from Flower Mound High School, he tried to enlist in the Marines, but was rejected. Reflecting back, he said he should have realized he would not be accepted for military service, but he didn’t understand at the time and he fell into depression for a while.

Mr. Vera eventually moved to his hometown, Midland, where he worked for an oil field trucking company. But his physical problems grew worse. He was on oxygen at night and during the day whenever he was sick, which was often. There were numerous lengthy hospitalizations for pneumonia. By late 2013, when one of his doctors asked him how he was doing, he replied that he was tired of being in the hospital all the time. The time had come for a lung transplant.

After being hospitalized for yet another flare-up, Mr. Vera was supposed to go home on April 22, when he was told ‘We found a pair of lungs for you,’ he recalled. “It was a wave of emotion. I felt so many things at once – happy, scared, grateful.”

Pulmonologist Dr. Vaidehi Kaza, Assistant Professor of Internal Medicine, said Mr. Vera’s transplant was special to her because she was the first physician to see him in the transplant clinic.

“I knew how sick he was, being admitted to the hospital almost every month. When I gave him the news he was shocked, trembling actually… It’s really gratifying to be able to give someone such life-changing news.”

Mr. Vera’s recovery is on track. A few weeks after his transplant, Mr. Vera said it’s wonderful not to need oxygen and that soon he won’t need daily breathing treatments − a first in his memory.

“These lungs are great!”

The privilege of hearing that kind of reaction from hundreds of patients who have had cardiothoracic transplants over the years is what makes the job so special, Dr. Torres said. “You cannot hear that too many times. Every time is special not only for us and our patient, but for their whole community of family and friends. It is the reason we’re all here.”

About UT Southwestern Medical Center
UT Southwestern, one of the premier academic medical centers in the nation, integrates pioneering biomedical research with exceptional clinical care and education. The institution’s faculty includes many distinguished members, including six who have been awarded Nobel Prizes since 1985. The faculty of more than 2,700 is responsible for groundbreaking medical advances and is committed to translating science-driven research quickly to new clinical treatments. UT Southwestern physicians provide medical care in 40 specialties to about 92,000 hospitalized patients and oversee approximately 2.1 million outpatient visits a year.