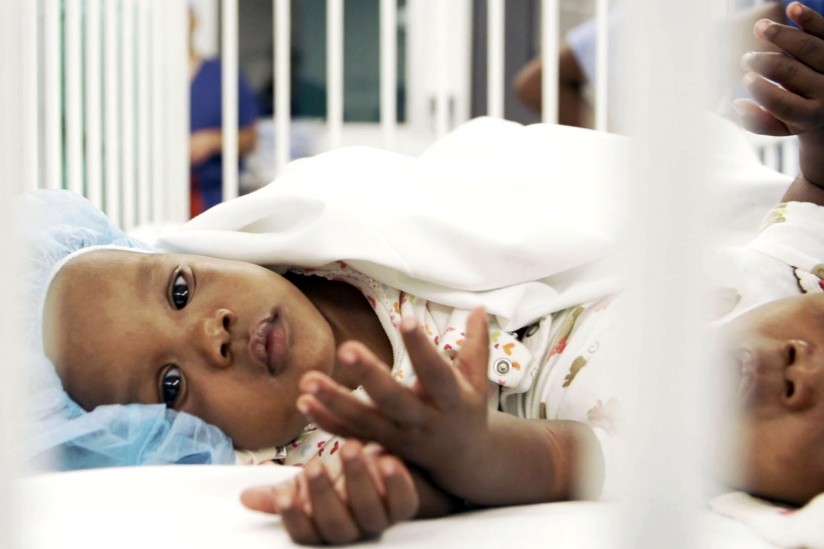 The twins were separated by an 18-member team during a seven-hour surgery. (Photo/Children’s Hospital Los Angeles)

An 18-member team of physicians and nurses from Keck Medicine of USC and Children’s Hospital Los Angeles recently led an international collaboration to separate a pair of 6-month-old conjoined twins in Haiti, the first such operation ever performed in that country.

The twins, Marian Dave-Nouche Bernard and Michelle Dave-Nouche Bernard, were born as one on Nov. 24, 2014. They were separated May 22 during a seven-hour surgery at University Hospital of Mirebalais, which is situated in a poor rural community about 36 miles northeast of Port-au-Prince, Haiti’s capital city.

“The girls are doing fantastic,” said Haitian-born surgical team leader Henri Ford, the surgeon in chief at CHLA, vice dean for medical education and a professor and vice chair for clinical affairs at the Keck School of Medicine of USC. “It was an extremely exhilarating day — not only did our preparations pay off and the surgery succeed in spectacular fashion, but this was also a time to put politics aside and celebrate our national pride.”

Marian and Michelle — so-called omphalopagus twins who were connected at the abdomen — are actually triplets: Sister Tamar was born separately and is healthy.

The conjoined sisters had faced each other since birth, but they recuperated in separate beds in the hospital’s neonatal intensive care unit. They were ready to be discharged 12 days after surgery.

We anticipate Marian and Michelle will recover fully and go on to lead healthy and happy lives.

“We anticipate Marian and Michelle will recover fully and go on to lead healthy and happy lives,” Ford said.

‘It was an extraordinary moment’

Conjoined twins occur in roughly 1 in 200,000 births, and omphalopagus twins represent about 30 percent of all conjoined twin births. As triplets, these girls are considered even rarer, occurring about once in 1 million births. Fused together by the breastbone (or xiphoid bone) in the lower portion of the sternum, Marian and Michelle also had attached livers that were separated during the procedure. 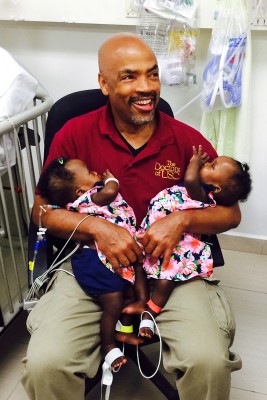 Their mother, Manoucheca Ketan, gave birth to all three of her daughters after carrying them for 36 weeks. The twins shared a crib until 10 a.m. May 22, when Ketan and her husband, David Bernard, watched as their infant daughters were wheeled into surgery as one. Ten hours later, after the surgery, the parents wept when they next saw the twins — resting in separate cribs.

“It was an extraordinary moment,” Ketan said, describing her reaction when she first saw her separated daughters. “When I first met Dr. Ford, he told me he was confident we could separate my children, but I didn’t know how it would turn out when the day started. Now I am feeling a lot of joy and want to recognize and thank the hospital for everything.”

The complex surgical procedure got underway within 24 hours of the arrival of the 18-member surgical team of surgeons, anesthesiologists and nurses. The Keck/CHLA team was joined by 12 medical staff members from Centres GHESKIO, Hospital Bernard Mevs–Project Medishare and the hospital in Mirebalais, which was led by Maclee Jean-Louis, director of surgery. Ford described the group as an international medical dream team.

The family received free treatment supported by the Haitian Ministry of Health and Partners in Health, an international health organization. Keck Medicine of USC and CHLA covered the travel expenses of the medical team and donated supplies to ensure the success of the operation.

Anticipating a six- to eight-hour procedure, doctors made the first incision along the abdominal wall that connected Marian and Michelle at 1:14 p.m. At 2:50 p.m., the girls were surgically separated to a burst of applause from the team. Then Marian was moved to an adjacent table.

Wearing red caps, Marian’s team of six doctors and nurses hovered over her to close her incision, while Michelle’s team worked in yellow caps — coincidentally reflecting the colors of USC.

The mom gave them red and yellow bands months ago to identify them. They were destined to be separated by Trojan surgeons.

“The mom gave them red and yellow bands months ago to identify them,” Ford said. “They were destined to be separated by Trojan surgeons.”

“This surgery took less time than previous conjoined twin separations we have performed at CHLA, since there was no pelvic attachment,” said James Stein, the lead surgeon during the separation who is associate chief of surgery at CHLA and associate professor of surgery at the Keck School of Medicine. He has now separated six pairs of conjoined twins.

“There are surgeries that require the expanded expertise of a [major hospital], but the twins’ anatomy and our team’s expertise allowed us to undertake the surgery in Haiti and compile the appropriate resources to do the surgery there safely,” Stein said.

By doing the operation in Haiti, the children benefited emotionally from the proximity of their parents, Ford said, and the surgery could be done more cost-effectively than in Los Angeles.

During the operation, the girls underwent 11 separate procedures, with only a few minor complications. Early on, surgeons and anesthesiologists encountered a “cross circulation” — when fluids, blood and medication pass through one twin’s liver to the other without benefiting the first.

Doctors also removed an ovarian cyst in Michelle and surgically inserted patch material in both girls to reconstruct their abdominal walls after separation. They also formed new belly buttons for the twins, whose midline vertical scars should nearly disappear over time, Stein said.

One moment during the operation seemed to sum up the enormity of the procedure for Ford.

“Their lower chests were connected, so we had to remove a piece of the sternum, the breastbone, and then you could see their lungs and their hearts beating,” he recalled.

Once the girls were moved to intensive care, a team of intensivists led by Peggy Han of Weill-Cornell Medical College and neonatal intensive care unit nurses worked with local staff to oversee the twins’ recovery.

Volunteers from two other U.S. hospitals later joined the team and help oversee care. Forty-eight hours after surgery, the girls were breathing independently, and after 72 hours they were being fed with a combination of breast milk and formula, Ford said. 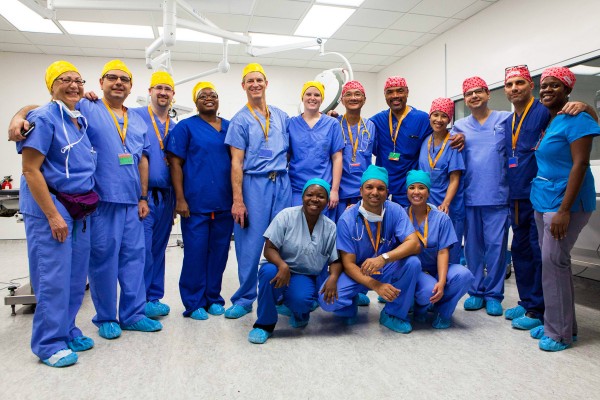 Ford started recruiting his team in September after initial conversation with doctors in Haiti. Ford and team members made almost monthly trips to Haiti between the November births and the May 22 surgery, checking up on the health of the girls and making sure that the proper human and material resources or equipment were available to safely do the surgery. By March, the team was set and the girls, strong and healthy, were scheduled for the procedure.

The team takes a break in the surgery suite at University Hospital in Mirebalais. (Photo/Children’s Hospital Los Angeles)

Hours after the surgery, the Haitian media reported on the milestone operation and, three days postoperatively, the newly famous twins were paid a visit by Haitian first lady Sophia Martelly and Minister of Health Florence Guillaume.

In the coming weeks, the girls will recover from their incisions and undergo physical therapy to help strengthen neck muscles weakened from facing in a single direction for such a long time.

“The girls look great; we don’t expect any more surgeries,” Stein said. “This was all about planning and organization. The amazing part for all of us is conducting seven hours of surgery and then seeing two kids side-by-side, when they used to be just one. It’s just awe-inspiring.”

Ford added, “I liken the entire international team of surgeons, anesthesiologists, intensivists, respiratory therapists and nurses to a symphony orchestra.”