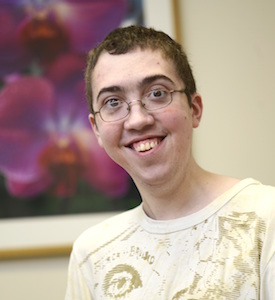 Josiah Ferrell is recovering after receiving the first combined lung and liver transplant in North Texas. He is the 75th patient nationwide to receive the rare double-organ transplant, performed at William P. Clements Jr. University Hospital

Josiah Ferrell of Gainesville is now able to walk outside without the oxygen tank he has carried around 24 hours a day and breathe in the fresh air of the outdoors for the first time in about two years.

“It limited what I could do. I basically never left the house. A portable machine wouldn’t supply enough oxygen,” said Mr. Ferrell, who has cystic fibrosis, a genetic disease that results in thick, sticky mucus that builds up in the airways of the lungs and in other organs. “I feel pretty good now. I have more energy.”

His ambitions remain grounded. He’d like to catch up on some movies he missed out on, including the latest in The Hobbit trilogy and Star Wars: The Force Awakens.

“We had our first real family outing since the transplant – dinner at Olive Garden. I had really been looking forward to that. It was my first restaurant meal since 2014. I’d like to go to Target.”

Though still recovering from the surgeries, Mr. Ferrell said he is grateful for the donated organs and happy to be able to take part more fully in life.

“He’s laughing and cracking jokes now. He’s upbeat,” said his father, John Ferrell. “He’s gotten back to being himself.”

“It’s rare for someone to need both these organs and, at the same time, to be healthy enough to tolerate the surgery,” said Dr. Fernando Torres, Professor of Internal Medicine and Medical Director of Lung Transplantation at UT Southwestern. Mr. Ferrell’s physicians believed he was that rare patient. 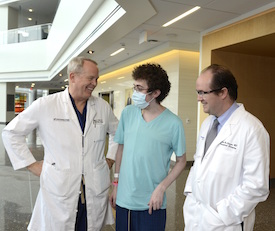 “UT Southwestern wants to be – and continues to be ­– at the forefront of complicated surgeries,” Dr. Torres said. “Given our expertise in transplantation, we are able help patients with difficult situations like this that other centers might not accept.”

For that reason, the team of experts had decided to remove one lung and complete that transplant operation before removing the second lung. That way, the team would avoid having to put Mr. Ferrell on a heart-lung bypass machine.

“The lungs were implanted without much of the difficulty we had anticipated and planned for, and the transition from lung to liver transplant was seamless,” said Dr. Michael Wait, Professor of Cardiovascular and Thoracic Surgery at UT Southwestern, who performed the lung transplant.

“Everything had to be aligned for this to happen – the two transplant teams, the right patient, the right donor,” said Dr. Wait, Chief of the Cardiovascular and Thoracic Surgery Service at William P. Clements Jr. University Hospital.

Fellow transplant surgeon Dr. Malcolm MacConmara, Assistant Professor of Surgery, who performed the liver transplant, was equally pleased by the success of the liver teams.

“The surgery had to be carefully planned and coordinated. You have two different surgical teams – the thoracic team putting in the lungs and the abdominal team putting in the liver – and it all has to be carefully thought out in advance,” said Dr. MacConmara, who is dually trained in transplant surgery and immunology. “This surgery showcases the best of what we have at UT Southwestern. We communicated exceptionally well in the planning. It’s an example of a well-thought-out, well-executed plan between the cardiothoracic surgery team and the abdominal surgery team, as well as all the other professionals involved.”

While lung disease is present in more than 95 percent of patients with cystic fibrosis, liver disease affects only about 25 percent of CF patients, and liver cirrhosis occurs in only about 8 percent, according to Dr. Raksha Jain, Assistant Professor of Internal Medicine and Medical Director of the Cystic Fibrosis Program at UT Southwestern, who has been part of Mr. Ferrell’s care team since he first came to UT Southwestern in 2013.

“He’s a sweet young man. He doesn’t complain a lot, even though he’s had his share of rough times and lengthy hospital stays. He understands his disease and does a good job of keeping up with what he needs to do to be as healthy as possible,” Dr. Jain said.

But despite doing everything his UT Southwestern physicians asked of him, his lungs and liver were failing and needed to be replaced. On the evening of Jan. 12, 2016, as Mr. Ferrell was watching The Pink Panther at home with his family the phone rang: There was a potential donor for both organs. Both organs were in good condition, and they were a good match.

At 7:51 a.m. Jan. 13, the surgery began at Clements University Hospital. The first team successfully removed one lung, replaced it, took out the second lung, and replaced it.

At 1:18 p.m., the liver transplant surgery team stepped up, using a piggyback technique that leaves in place an important vein that returns blood from the abdominal organs to the heart, which helped keep him stable. The liver team completed its transplant at 6:35 p.m. and the thoracic team closed his chest at 7:55 p.m. Mr. Ferrell was discharged from the hospital on Feb. 5 and was able to return home this month.

From a long-term perspective, Mr. Ferrell’s recovery should be little different from that of any lung-transplant patient, his physicians said. While his recovery has gone well, he still has a long journey ahead, as the first nine months or so following any transplant are a period of intense follow-ups, with myriad tests performed and many adjustments made to medications.

But with his new organs also come new vistas for his future.