The existence of new “social” neurons has just been demonstrated by scientists from the Institut de neurosciences des systèmes (Aix-Marseille University / INSERM), the Laboratoire de psychologie sociale et cognitive (Université Clermont Auvergne / CNRS), and the Institut de neurosciences de la Timone (Aix-Marseille University / CNRS). Their research on monkeys has shown that when these animals are made to perform a task, the presence or absence of a conspecific—that is, another monkey—determines which neurons are activated. Published in Social Cognitive and Affective Neuroscience, these findings broaden our knowledge of the social brain and help us better grasp the phenomenon of social facilitation1.

Understanding how the brain functions within a social context is a major challenge facing neuroscientists.  Through their unique multidisciplinary collaboration, a primate neurophysiologist and an experimental social psychologist have now discovered two new classes of neurons in the prefrontal cortex: social and asocial neurons.

Most areas of the brain are associated with specific tasks. Some are specialized in the processing of information related to life in society: they make up the so-called social brain. In connection with thesis research conducted by Marie Demolliens2,  CNRS researchers Driss Boussaoud and Pascal Huguet assigned monkeys the task of matching a picture shown on a touch screen with one of four different items displayed at the corners of the same screen. Executing such a task requires use of the prefrontal cortex but not the “social” areas of the brain. The researchers made daily recordings of neuronal electrical activity in this region of the brain while monkeys performed the task in the presence or in the absence of a conspecific.

This work reveals the important connection between social context and neuronal activity, and the consequences on behavior: which neurons the brain uses depends on whether a conspecific is present, even if the task is the same. Thus, rather than being limited to the areas of the brain principally associated with social activity, social neurons might actually be dispersed throughout the brain and play a role in various tasks—whether or not the latter are social in nature.  These findings cast new light on the nature of the social brain as well as certain behavioral disorders characteristic of autism and schizophrenia. 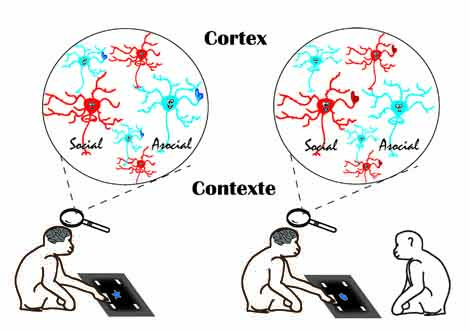 Figure 1: Differential activation of social and asocial neurons depending on whether the monkey performing the touch screen task is in the presence or absence of a conspecific.

1 Social facilitation refers to enhanced performance of an activity due to the presence of a conspecific. It is observed among all species whose members live in groups (i.e., social species).

2 Under the joint supervision of Driss Boussaoud and Pascal Huguet.