A study using brain images from “quiet” MRI machines adds to the growing body of evidence that breastfeeding improves brain development in infants. Breastfeeding alone produced better brain development than a combination of breastfeeding and formula, which produced better development than formula alone.
Support for the developing brain MRI images, taken while children were asleep, showed that infants who were exclusively breastfed for at least three months had enhanced development in key parts of the brain compared to children who were fed formula or a combination of formula and breastmilk. Images show development of myelization by age, left to right. Credit: Baby Imaging Lab/Brown University 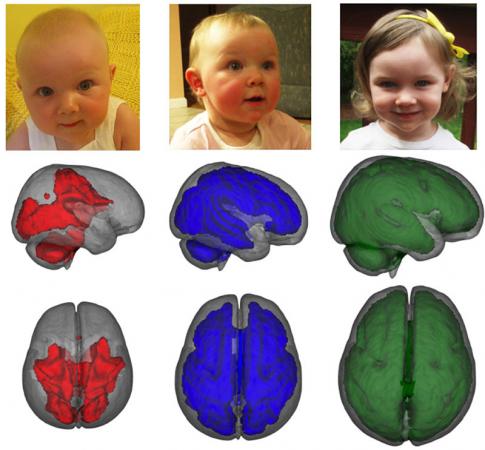 The study made use of specialized, baby-friendly magnetic resonance imaging (MRI) to look at the brain growth in a sample of children under the age of 4. The research found that by age 2, babies who had been breastfed exclusively for at least three months had enhanced development in key parts of the brain compared to children who were fed formula exclusively or who were fed a combination of formula and breastmilk. The extra growth was most pronounced in parts of the brain associated with language, emotional function, and cognition, the research showed.

This isn’t the first study to suggest that breastfeeding aids babies’ brain development. Behavioral studies have previously associated breastfeeding with better cognitive outcomes in older adolescents and adults. But this is the first imaging study that looked for differences associated with breastfeeding in the brains of very young and healthy children, said Sean Deoni, assistant professor of engineering at Brown and the study’s lead author.

“We wanted to see how early these changes in brain development actually occur,” Deoni said. “We show that they’re there almost right off the bat.”

The findings are in press in the journal NeuroImage and available now online.

Deoni leads Brown’s Advanced Baby Imaging Lab. He and his colleagues use quiet MRI machines that image babies’ brains as they sleep. The MRI technique Deoni has developed looks at the microstructure of the brain’s white matter, the tissue that contains long nerve fibers and helps different parts of the brain communicate with each other. Specifically, the technique looks for amounts of myelin, the fatty material that insulates nerve fibers and speeds electrical signals as they zip around the brain.

Changes “almost right off the bat”
Mean myelin content — the fatty material that insulates nerve fibers and speeds electrical signals — rises with breastfeeding. The changes to developing brains happen early, almost from the start. Credit: Baby Imaging Lab/Brown UniversityDeoni and his team looked at 133 babies ranging in ages from 10 months to four years. All of the babies had normal gestation times, and all came from families with similar socioeconomic statuses. The researchers split the babies into three groups: those whose mothers reported they exclusively breastfed for at least three months, those fed a combination of breastmilk and formula, and those fed formula alone. The researchers compared the older kids to the younger kids to establish growth trajectories in white matter for each group.

The study showed that the exclusively breastfed group had the fastest growth in myelinated white matter of the three groups, with the increase in white matter volume becoming substantial by age 2. The group fed both breastmilk and formula had more growth than the exclusively formula-fed group, but less than the breastmilk-only group.

“We’re finding the difference [in white matter growth] is on the order of 20 to 30 percent, comparing the breastfed and the non-breastfed kids,” said Deoni. “I think it’s astounding that you could have that much difference so early.”

Deoni and his team then backed up their imaging data with a set of basic cognitive tests on the older children. Those tests found increased language performance, visual reception, and motor control performance in the breastfed group.

Deoni says the findings add to a substantial body of research that finds positive associations between breastfeeding and children’s brain health.

“I think I would argue that combined with all the other evidence, it seems like breastfeeding is absolutely beneficial,” he said.

Other authors on the study were Douglas Dean, Irene Piryatinsky, Jonathan O’Muircheartaigh, Lindsay Walker, Nicole Waskiewicz, Katie Lehman, Michelle Han and Holly Dirks, who all work with Deoni in the Baby Imaging Lab. The work was funded by the National Institutes of Mental Health.