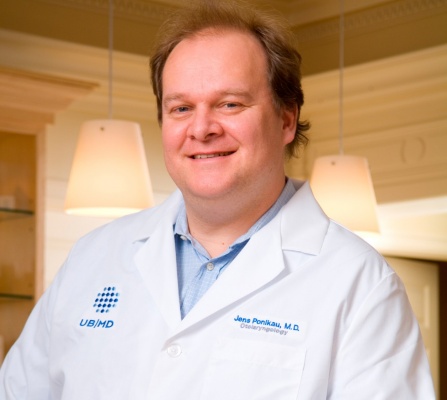 The new test, based on clinical studies conducted by Jens Ponikau, MD, clinical assistant professor at UB and colleagues, will provide chronic rhinosinusitis sufferers with a definitive diagnosis for the first time.

The new test, which is being launched this month nationwide by Immco Diagnostics of Amherst, N.Y., makes it possible, for the first time, to definitively diagnose the condition. Immco Diagnostics licensed the test from the Mayo Clinic, where the researchers, who later joined UB, first developed and patented it.

“This is a game-changer,” says Jens U. Ponikau, MD, clinical assistant professor of otolaryngology at UB, who led the university’s clinical trials on the new test with David A. Sherris, MD, professor and chair of the UB Department of Otolaryngology, and Kishore Malyavantham, PhD, of Immco. “It provides physicians with a way to precisely identify what kind of inflammation is present in the nose and can help guide their treatment approach.”

Chronic rhinosinusitis is one of the most common chronic diseases in the U.S., with more than 30 million sufferers, about 14 percent of the population. There are no approved drugs or treatments that target chronic rhinosinusitis, mainly, Ponikau says, because physicians have not had sufficient insight into what causes it.

“The symptoms for chronic rhinosinusitis include long-term nasal congestion, thick mucus, headache, loss of sense of smell and opportunistic bacterial infections, most of which are similar to other common conditions,” Ponikau says. “So is it a year-round allergy, a deviated septum, the common cold, some recurrent bacterial infection or chronic sinusitis? Until now, there were few ways to tell.”

Some patients have even undergone endoscopic surgery in hopes of getting some relief, but often the disease comes back after surgery, he says.

While working at the Mayo Clinic, Ponikau and Sherris made the discovery that chronic rhinosinusitis (CRS) is an immunologic condition in which rare white blood cells called eosinophils travel through the nasal skin into the mucus, where they release a toxic protein called major basic protein (MBP), damaging tissue and causing symptoms.

The Mayo Clinic patented the discovery as a clinical test and Ponikau and Sherris brought the research to Western New York when they were recruited to UB in 2003 to reestablish its program in otolaryngology, a specialty focusing on the ear, nose and throat.

“The major basic protein is specific only to chronic rhinosinusitis and does not appear in acute sinusitis, allergy or the common cold,” explains Ponikau, “but we and researchers at other centers around the world had to confirm this.”

“Patients afflicted with CRS show a specific kind of airway inflammation, which is usually not caused by bacterial infection,” says Lakshmanan Suresh, PhD, clinical associate professor in the Department of Oral Diagnostic Sciences in the UB School of Dental Medicine and vice president of R&D and clinical services at Immco. “Our CRS test shows inflammation elicited due to fungus and is helpful in identifying patients where antibiotic therapy may not be helpful.”

In February, the New York State Department of Health provided regulatory approval for the test to measure MBP in nasal mucus.

The test can be performed in a physician’s office. A sample of nasal mucus is taken from a patient and is then sent to Immco Diagnostics for analysis, which will typically take a few days.