ANN ARBOR, Mich. — With prescription drug abuse at epidemic levels nationwide, and overdoses killing more people than auto accidents in many states, a new University of Michigan study provides striking new data about the misuse of potent prescription painkillers and sedatives by teens and young adults.

In all, 10.4 percent of the teens and young adults treated in the emergency room for any reason admitted to misusing a prescription painkiller or sedative at least once in the last year, the study finds. That included taking the drugs to get high, taking more of the drug than was prescribed to them, or taking drugs prescribed to someone else.

What’s more, most of this use was apparently illicit: The vast majority of those who admitted this use had no prescriptions for these drugs on their medical records.

The study also raises the possibility that emergency room visits, for any reason, could become important occasions for detecting and addressing prescription drug problems among young people. 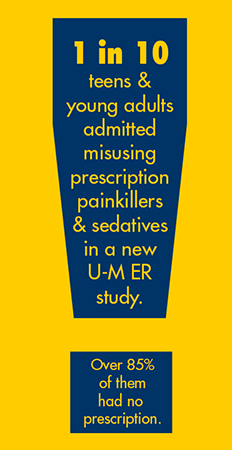 The results are published in a new online-first paper in the journal Pediatrics, by a team from the U-M Medical School and U-M Injury Center. They draw their data from a large, confidential, tablet-based survey of 2,135 people between the ages of 14 and 20 years, conducted in 2010 and 2011 during visits to the U-M Health System’s adult and pediatric emergency departments.

It’s the first time this issue has been studied in an emergency department setting – even though ER doctors often prescribe opioid painkillers and sedatives for emergency use. They also care for many patients who have accidentally or intentionally overdosed on these drugs. In fact, the Centers for Disease Control and Prevention has estimated that 100 deaths per day, and around 700,000 emergency department (ED) visits per year, result from prescription drug overdoses.

School-based studies have found rates of misuse among young people to be around 8 percent. But such studies miss those who have dropped out of school or did not continue their education past high school.

Lauren Whiteside, M.D., who led the study during her U-M Injury Center postdoctoral research fellowship, says the findings suggest that emergency department could be an effective setting for screening teens and young adults for prescription drug misuse, and for intervening early before problems arise.

She also noted that it’s important for emergency physicians to be aware of the risk that patients could be seeking drugs for misuse or diversion to others when they come to the ER.

The study reveals several risk factors that were associated with non-medical use of prescription painkillers and sedatives.

“These patients are often using the emergency department for their medical care, not primary care settings,” says Whiteside. “So, in order to curb this problem and address overdose and addiction, the ED is a good place to start.”

She notes that because the study was performed in one emergency setting, further study is needed to validate the findings. And more research to develop and test screening tools and interventional tactics will be needed.

Whiteside, who is now at the University of Washington, worked with U-M Injury Center director and U-M associate professor of emergency medicine and public health Rebecca Cunningham, M.D., on the study. The two continue to work together on this topic, and the U-M Injury Center continues to seek solutions to the growing epidemic.

The ER as a setting for screening and intervention has also been raised in research on other issues including alcohol abuse, non-prescription “hard” drug abuse and violence.

But, says Whiteside, “One of the main differences between non-medical prescription opioid and sedative misuse and other drug use is that the emergency physician is providing the substance. It’s a really difficult thing to tackle and requires a multipronged effort.”

Cunningham notes that, “It will likely take a concerted effort at the state level, with improved information systems aiding prescribing physicians to identify youth at risk, a change in prescribing practices that take into account the epidemic and the public health crisis, and improved early screening and intervention to change the current rising trend of overdose deaths related to prescription medications.”

The study asked teens and young adults about their use of the prescription opioids fentanyl, oxycodone, hydrocodone, methadone, buprenorphine, and suboxone, and the sedatives Valium, Serepax, Ativan, Xanax, Librium, Rohypnol, and GHB, among others.

Funding: The data come from a larger randomized controlled trial funded by the National Institute of Alcohol Abuse and Alcoholism, funded by grant AA018122.

Authors: In addition to Whiteside and Cunningham, the research team included Maureen A. Walton, MPH, Ph.D., and Erin E. Bonar, Ph.D. of the U-M Department of Psychiatry; Amy S.B. Bohnert, Ph.D., and Frederic C. Blow, Ph.D., of U-M Psychiatry and the VA Center for Clinical Management Research; and Peter Ehrlich, M.D. of the U-M Department of Surgery’s Section of Pediatric Surgery. All are Injury Center members. Cunningham, Blow, Walton and Bohnert are all members of the U-M Institute for Healthcare Policy and Innovation.

Resources for parents and educators: